Get out of Hell Free option back in Christianity 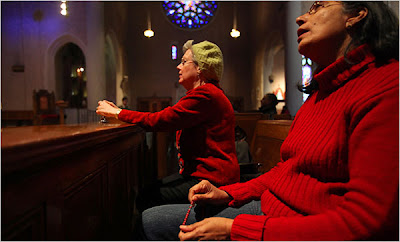 The announcement in church bulletins and on Web sites has been greeted with enthusiasm by some and wariness by others. But mainly, it has gone over the heads of a vast generation of Roman Catholics who have no idea what it means: “Bishop Announces Plenary Indulgences.”

In recent months, dioceses around the world have been offering Catholics a spiritual benefit that fell out of favor decades ago — the indulgence, a sort of amnesty from punishment in the afterlife — and reminding them of the church’s clout in mitigating the wages of sin.

In simple english, Plenary Indulgences are sort-of 'Get Out of Hell Free card' from a priest. 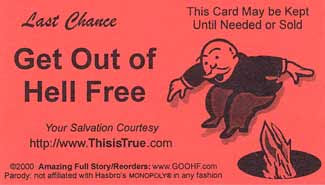 With his traditionalist bent and sympathies for pre-Second Vatican Council mumbo jumbo, it comes as no surprise that Pope Benedict is giving the nod to the return of indulgences in the Catholic Church.

Roman Catholic doctrine is full of implausible theological concepts. Only a very naive person could possibly go along with half of it. Indulgences only add to the impression of a Church out-of-touch and intent on reviving the more Monty Pythonesque aspects of Catholic religiosity.

Indulgences allegedly grant a sort of amnesty from punishment in the afterlife. Of course, they also place power back in the hands of priests - which is what Benedict is all about. The re-emergence of indulgences, saint veneration and other stratagems from the RC box-of-tricks is in part a move to help shore up the fading influence of the Church.

Indulgences were dropped decades ago by Catholics with good sense who realized, much as Luther did in his day, that such beliefs risked making the Church into a sort of spiritual bazaar where 'sins' could be absolved with clerical rigmarole, helped by perhaps a donation to a charity or two.

“Why are we bringing it back?” asked Bishop Nicholas A. DiMarzio of Brooklyn, who has embraced the move. “Because there is sin in the world.”

Isn't this a bit like bribing the god via bribing the priests?
Posted by Zafar Khan at 05:15