Gaza: Killing two birds with one stone (or bullet) 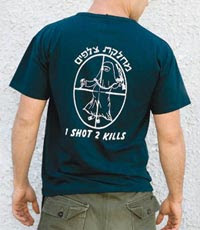 "You take whoever [in the unit] knows how to draw and then you give it to the commanders before printing," an Israeli soldier who identified himself as Y., told Haaretz on Saturday, March 21.

Since the end of the Gaza war, Israeli soldiers, marking the end of training of field duty, wear T-shirts depicting images of atrocities in overcrowded strip.

A T-shirt was designed by infantry snipers with an inscription reading "Better use Durex (trademark for condoms)," next to an image of a dead Palestinian baby, with his weeping mother and a teddy bear beside him.

A T-shirt designed by the Givati Brigade's Shaked battalion shows a pregnant Palestinian woman with a bull's-eye superimposed on her belly, with the slogan, "1 shot, 2 kills."

A graduation shirt for soldiers who completed a snipers course depicts a Palestinian baby, who grows into a combative boy and then an armed adult, with the inscription, "No matter how it begins, we'll put an end to it."

Israeli troops killed more than 1,350 Palestinians, mostly civilians, and wounded 5,450 others in 22 days of attacks in Gaza, home to 1.6 million Palestinians.

The onslaught wrecked havoc on the infrastructure of the densely-populated enclave, leaving tens of thousands of homes and other buildings in ruins.

UN special rapporteur on human rights in the Palestinian territories Richard Falk has accused Israel of committing war crimes of the greatest magnitude in Gaza.

Do you think the world will take some action this time?
Posted by Zafar Khan at 11:45