IDF knows how to destroy: Physically and Mentally 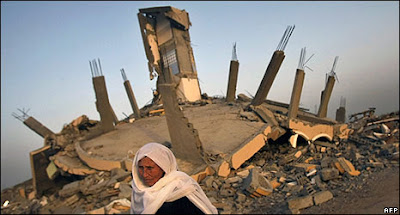 The Israeli Defense Forces said they operated in accordance with international law during the conflict.

However, the use of mines to destroy homes contradicted this claim, the head of the Amnesty International fact-finding mission to southern Israel and Gaza, Donatella Rovera, has argued.

Israeli troops had to leave their vehicles to plant the mines, indicating that they faced no danger and that there was no military or operational justification, she said.

Breaking the Silence, an Israeli group that gathers and circulates the testimonies of Israeli soldiers, has also told the BBC News website that its findings from the Gaza war suggested many demolitions had been carried out when there was no immediate threat.

Destruction of civilian property is not illegal in itself under international law, but it must be justifiable on military grounds - for example if the building was booby trapped or being used as cover for enemy fighters.

Thousands of buildings were destroyed in the 22-day Israeli operation.

Some of them were police stations, mosques and government premises attacked in targeted airstrikes, in many cases with surrounding buildings left in tact.

In an another article from Haaretz titled, "Pots of urine, feces on the walls - how IDF troops vandalized Gaza homes":

We had already visited this house, belonging to the Abu Eida family. It is the only one of the family's nine large houses that remained standing at the eastern edge of the city of Jabalya following Operation Cast Lead. The demolition of the family's houses and its four cement factories spells the loss of 40 years of hard work.

One Hebrew word scrawled on a wall tells the story of the 10 days when young Israeli soldiers became the ostensible prison wardens of five people. The youngest is Suheila Masalha, 55; the eldest is her mother Fatma, who is perhaps 85 or 90 or older. The only man is her brother Mohammed, 65, who is paralyzed and dependent on the women of his family. And there were two more women from the Abu Eida family - Rasmiya, 70, who owns the house, and her sister-in-law Na'ama, 56, who is blind.

"Jail" ("mikhla'a" in Hebrew), wrote the soldiers on the wall of the room where they kept the man and the four women. They did not allow them to use the toilet, but forced them to use all kinds of plastic containers kept in the room, for nine of the days.

From other graffiti you can conclude that it was the soldiers of the Golani Brigade - who were drafted in August 2007, and in January and March of 2008 - who sketched orientation maps on the walls of nearly every room. For example, "Position: entry. Direction: southeast," and a few squares that indicated the houses in the area. "Us," or "We are here," or just an X marked on square No. 5 - Rasmiya Abu Eida's house that became an Israel Defense Forces base.

The soldiers kept kosher, judging by the words "meat" and "dairy" scrawled in red on the kitchen cabinets. Maybe someone was kidding around, or maybe someone thought this was going to be their base for several more months, because they also wrote "Kosher for Passover" on one of the cupboards. Also in red.

The Masalha family lived in a kind of tin shack and raised their sheep near the Abu Eida family (the shack and the sheep were destroyed). On the evening of Saturday, January 3, when the Israeli ground incursion began, they fled the shelling and sought refuge with the neighbors in concrete houses that seemed safer. But the shells and shooting from close range only increased and the children were scared; they cried and screamed and members of the extended family decided to head west, on foot, with white flags.

The adults carried the children - without suitcases and clothing, and even without ID cards. There was no one to carry Fatma Masalha and her son Mohammed, who remained behind. Na'ama and her sister-in-law Rasmiya decided to stay with the guests who had sought shelter. That was on Sunday, January 4, at around 3 P.M.

A spacious, well-kept, generously furnished home awaited the soldiers on the following morning, when they arrived. There are other houses like this in Gaza, especially on the agricultural lands in the outskirts, which over the years have become bourgeois areas. These are exactly the places where the signs of shelling and the fires caused by the phosphorous bombs made clear to the civilians that they should leave if they held their lives dear.

On January 18, when the forces pulled out, similar sights awaited people whose homes had become military bases in their absence. There were bullet-pocked walls, ripped-up sofas and armchairs, smashed televisions and computers, shards of glass and porcelain dishes and broken wooden thresholds. Clothing was ripped up. And there were mountains of very Israeli garbage - empty tin cans, cardboard boxes, empty bags of potato chips and chocolate, and full bags of sugar and raspberry-flavored drinking powder. Everything was kosher for Passover under the supervision of the Chief Rabbinate. And there were Hebrew newspapers, including the January 9 issue of the army magazine Bamahane.

In one house they left behind lots of unopened canned goods. The local people assumed that commanding army officers had stationed themselves there, as well as in other houses where there was no racist graffiti and family belongings hadn't been vandalized. Remnants of ammunition and IDF equipment were also found in and around many houses, as well as books of Psalms, the "Wisdom of the Sages" and "Hafetz Chaim," which is about rabbinical laws concerning slander and gossip.

In the midst of all of this were plastic bottles of urine and many closed bags - in some houses, olive-colored ones - of excrement. People assumed that the commanders stayed there. There are houses where excrement was smeared on the walls, or where dry piles of it were found in corners. In many cases, the smells indicated that soldiers had urinated on piles of clothing or inside a washing machine. In all the houses the toilets were overflowing and clogged, and there was filth all around. When the Abu Eidas returned to house No. 5 in Jabalya, they discovered pots of urine and excrement in the refrigerator.

"Like ants, so many of them," says Na'ama, an Arabic teacher, of the soldiers who came into their home on January 5. She recalls that the soldiers had to be told that Mohammed could not put his hands up, and that they ordered the residents to strip. (Na'ama refused and one soldier made do with prodding and probing; they told Suheila to strip because they thought she was wearing an explosives belt.) The soldiers were amazed that the house was so large - "For just five people" - and kept saying that "this is Hamas money." They also asked, "Where are the tunnels, where is Hamas, if everyone left why didn't you leave?"

The soldiers ordered the five people to go into one room and stay there. They let them take some food: bread, olives, oil, water. They confiscated the mobile phones when they saw Na'ama holding one: "You want to call your brother to come with Hamas, to shoot at us," said one of the soldiers. "Liar," they said a lot, as well as "shut up, you donkey," in broken Arabic. They imitated her mockingly when she said "Ya Rab" ("Oh God"). The five prisoners could not pray, as they were not allowed to clean themselves up before prayer and were forbidden to stand up. They were given two blankets, which were not enough, especially because the windows were smashed and the door was always open. A soldier always sat next to the door aiming his rifle at them. All five still have colds.

"You'll come out when we leave," was the answer given to Na'ama after she asked them to contact the Red Cross. Apparently, one soldier spoke fluent Arabic, another could speak some and others knew a phrase or two.

Was there anyone among the soldiers who was a little bit nice? "To my regret, no," Na'ama says. In a number of other houses or neighborhoods people who preferred not to flee encountered some soldiers who were somewhat courteous. In none of the other houses were people forbidden to use the toilet, but the men's hands were bound for two or three days. There are houses where the captives had no food for two or three days or no water for hours. "We don't have food either," said the soldiers in Izbet Abed Rabbo.

Soldiers broke down doors of grocery stores and helped themselves to candy and snacks. There were some who handed out candy to children; sometimes soldiers asked a child whom they forced to accompany them, as a human shield, to hand it out.

On the morning of January 14, the Red Cross came to pick up the five inhabitants of the "jail" in house No. 5. A short while beforehand, the soldiers had brought a portable gas burner in so Rasmiya could make hot tea, which they had not let her do before. "Maybe because the officer came," Na'ama says.

The IDF Spokesman's Office said in response that soldiers in Gaza were instructed in advance not to harm personal property unless there was a need to do so for operational purposes. "Not only did the soldiers not prevent the Palestinians from eating," the office said, "but they shared their army rations with them. The IDF has not received any reports about breaking into grocery stores. Concerning the claims about graffiti, the IDF sees this as a very serious matter, which contradicts the values and norms in which the soldiers are educated."