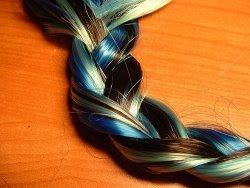 Recently I came across quite a few discussions where people are discussing about colouring their hair, etc. Here is a fatwa from Islam Online.

"It was reported that the Jews and Christians refrained from dyeing the hair, regarding such beautification and adornment as contrary to piety and devotion, and not befitting rabbis, priests, and ascetics. The Prophet (peace and blessings be upon him) forbade Muslims from imitating these people or following in their ways, in order that Muslims might develop their own distinctive and independent characteristics in appearance and behavior.

Al-Bukhari, on the authority of Abu Hurayrah, quoted the Messenger of Allah (peace and blessings be upon him) as saying, 'The Jews and Christians do not dye their hair, so be different from them.'

This, however, is not a command but only a recommendation, as is evident from the actions of the Companions of the Prophet (peace and blessings be upon him) such as Abu Bakr and `Umar, who used to dye their hair. Others, such as `Ali, Ubay ibn Ka`b, and Anas, did not.

The question now remains as to what type of dye is to be used. Should it be black or are there any other colors? Or black should be avoided?

In contrast, if a man is not of such advanced age or feebleness as that of Abu Quhafah, there is no harm in his using black dye. In this regard, Az-Zuhri said, 'We dyed our hair black when the face looked young, but discarded it when the face became wrinkled and the teeth decayed.' (Reported by Ibn Abu `Asim in the book on 'Dyeing the Hair')

Some of the early Muslims, including some Companions of the Prophet (peace and blessings be upon him) such as Sa`d ibn Abi Waqqas, `Uqbah ibn `Amr, Al-Hassan, Al-Hussayn, Jareer, and others permitted the use of black dye. Some scholars do not consider the use of black dye as permissible except during time of war, with possibility of making the enemy thrown off balance by seeing all Muslim soldiers in their blossoming youth.

Abu Dharr (may Allah be pleased with him) narrated, 'The best thing with which to dye gray hair is Henna and Katm.' (Mentioned in Fath Al-Bari) Henna makes the hair red, while Katm, a plant from Yemen, colors it black, tinged with red. Anas (may Allah be pleased with him) says, 'Abu Bakr dyed his hair with Henna and Katm, and `Umar dyed it with Henna only.'"
Posted by Zafar Khan at 10:07