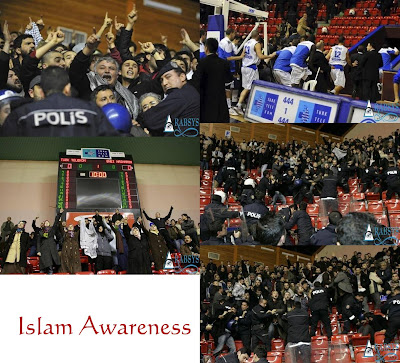 ANKARA, Jan 6 (Reuters) - Turkish basketball fans chanting "Israel, killers" stopped the start of a game against an Israeli team on Tuesday by throwing objects onto the court in protest against Israel's offensive in the Gaza Strip.

Some players were hit by the objects hurled by the crowd of several hundred, SkyTurk TV reported.

The players from Turkey's Telekom Ankara and Israel's Bnei Hasharon teams escaped hurriedly to their dressing rooms while police battled to keep the protesters off the court.

The Israelis were angered when the game was awarded as a technical victory to Telekom Ankara because Bnei Hasharon refused to start the contest an hour-and-a-half later, after police said they had cleared the arena.
Bnei Hasharon chairman Eldad Akunis Akunis said the decision was scandalous.

"After such a trying ordeal, there was simply no point in playing. The players were just concerned for their safety. We were also given instructions by the Israeli embassy staff, who were monitoring the situation, not to play," said Akunis.

Turkey, a predominantly Muslim country, has good ties with Israel but the violence in Gaza has sparked mass street protests and harsh criticism from the government. (Additional reporting by Ori Lewis in Jerusalem)
Posted by Zafar Khan at 22:32