Robert Fisk on the toothless and corrupt Egypt 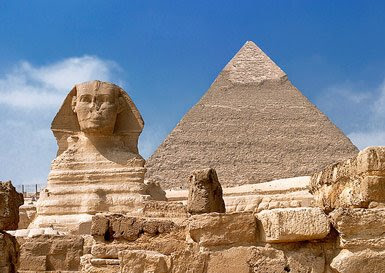 Robert Fisk: The rotten state of Egypt is too powerless and corrupt to act

There was a day when we worried about the "Arab masses" – the millions of "ordinary" Arabs on the streets of Cairo, Kuwait, Amman, Beirut – and their reaction to the constant bloodbaths in the Middle East. Could Anwar Sadat restrain the anger of his people? And now – after three decades of Hosni Mubarak – can Mubarak (or "La Vache Qui Rit", as he is still called in Cairo) restrain the anger of his people? The answer, of course, is that Egyptians and Kuwaitis and Jordanians will be allowed to shout in the streets of their capitals – but then they will be shut down, with the help of the tens of thousands of secret policemen and government militiamen who serve the princes and kings and elderly rulers of the Arab world.

Egyptians demand that Mubarak open the Rafah crossing-point into Gaza, break off diplomatic relations with Israel, even send weapons to Hamas. And there is a kind of perverse beauty in listening to the response of the Egyptian government: why not complain about the three gates which the Israelis refuse to open? And anyway, the Rafah crossing-point is politically controlled by the four powers that produced the "road map" for peace, including Britain and the US. Why blame Mubarak?

To admit that Egypt can't even open its sovereign border without permission from Washington tells you all you need to know about the powerlessness of the satraps that run the Middle East for us.

Open the Rafah gate – or break off relations with Israel – and Egypt's economic foundations crumble. Any Arab leader who took that kind of step will find that the West's economic and military support is withdrawn. Without subventions, Egypt is bankrupt. Of course, it works both ways. Individual Arab leaders are no longer going to make emotional gestures for anyone. When Sadat flew to Jerusalem – "I am tired of the dwarves," he said of his fellow Arab leaders – he paid the price with his own blood at the Cairo reviewing-stand where one of his own soldiers called him a "Pharaoh" before shooting him dead.

The true disgrace of Egypt, however, is not in its response to the slaughter in Gaza. It is the corruption that has become embedded in an Egyptian society where the idea of service – health, education, genuine security for ordinary people – has simply ceased to exist. It's a land where the first duty of the police is to protect the regime, where protesters are beaten up by the security police, where young women objecting to Mubarak's endless regime – likely to be passed on caliph-like to his son Gamal, whatever we may be told – are sexually molested by plain-clothes agents, where prisoners in the Tora-Tora complex are forced to rape each other by their guards.

There has developed in Egypt a kind of religious facade in which the meaning of Islam has become effaced by its physical representation. Egyptian civil "servants" and government officials are often scrupulous in their religious observances – yet they tolerate and connive in rigged elections, violations of the law and prison torture. A young American doctor described to me recently how in a Cairo hospital busy doctors merely blocked doors with plastic chairs to prevent access to patients. In November, the Egyptian newspaper Al-Masry al-Youm reported how doctors abandoned their patients to attend prayers during Ramadan.

And amid all this, Egyptians have to live amid daily slaughter by their own shabby infrastructure. Alaa al-Aswani wrote eloquently in the Cairo paper Al-Dastour that the regime's "martyrs" outnumber all the dead of Egypt's wars against Israel – victims of railway accidents, ferry sinkings, the collapse of city buildings, sickness, cancers and pesticide poisonings – all victims, as Aswani says, "of the corruption and abuse of power". Opening the Rafah border-crossing for wounded Palestinians – the Palestinian medical staff being pushed back into their Gaza prison once the bloodied survivors of air raids have been dumped on Egyptian territory – is not going to change the midden in which Egyptians themselves live.

Sayed Hassan Nasrallah, the Hizbollah secretary general in Lebanon, felt able to call on Egyptians to "rise in their millions" to open the border with Gaza, but they will not do so. Ahmed Aboul Gheit, the feeble Egyptian Foreign Minister, could only taunt the Hizbollah leaders by accusing them of trying to provoke "an anarchy similar to the one they created in their own country."

But he is well-protected. So is President Mubarak.

Egypt's malaise is in many ways as dark as that of the Palestinians. Its impotence in the face of Gaza's suffering is a symbol of its own political sickness.