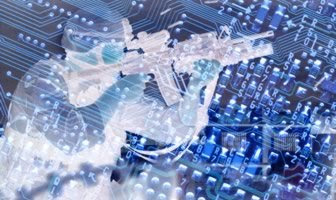 As Palestinian resistance fighters in the Gaza Strip fought invading Israeli troops on the ground, another war was raging between pro-Palestinian and pro-Israeli activists on the Internet.

"There were two wars going on," Amira Al Hussaini, Middle East and North Africa editor for Global Voices Online, a website that collects the work of bloggers from around the world, told the Christian Science Monitor Friday, January 23.

"There was the one going on on the ground, and a parallel war happening in the virtual world."

As Israeli troops continued to batter Gaza, home to 1.6 million people, pro-Palestinian and pro-Israel technology savvy activists engaged in cyber war to win support for their side.

In response, pro-Palestinian activists launched a website showing the scale of destruction in the impoverished strip.

"All the [online] social-networking tools were used to the best of people's abilities on both sides," Al Hussaini said.

The Israeli government also launched a campaign to recruit a multilingual "army of bloggers" to help win support to the Israeli war.

"The blogosphere and new media are another war zone," the head of the Israeli army Foreign Press branch, Avital Leibovich, has told The Jerusalem Post.

"We have to be relevant there."

The Doha-based Al-Jazeera has sent out reports from Gaza via Twitter to users.

It also posted an interactive map showing where war-related incidents in Gaza and Israel were happening.

"This is the first time that new media worked as a proven concept for how a mainstream media organization can cover an event like this online," Riyaad Minty, a new media analyst with the Doha-based Al-Jazeera television, said.