Life: 'Meaningless' or with a purpose 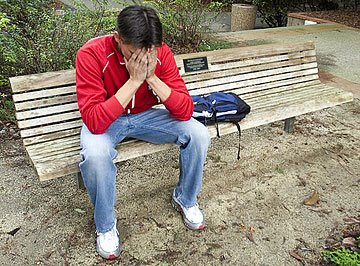 One in 10 young people believed life was not worth living or was meaningless, according to an "alarming" new report today.

A survey of 16- to 25-year-olds by the Prince's Trust found a "significant core" for whom life had little or no purpose, especially among those not in education, work or training.

The poll of over 2,000 showed that more than a quarter felt depressed and were less happy than when they were younger.

Almost half said they were regularly stressed and many did not have anything to look forward to or someone they could talk to about their problems.

Some 37% of those outside paid employment or education admitted to being frequently down or depressed, while 27% said their lives had no purpose. With young people expected to bear the brunt of job losses over the coming year, the findings are likely to raise concerns among policymakers.

This may come as a surprise to people in the developing world who view people in the western world as lucky and fortunate. Every year thousands of migrants die trying to cross the oceans to reach this land of milk and honey where it is said that 'Gold lies in the streets for people to pick up'.

Islam clearly states that this life has a purpose and that is to worship Allah and to thank him and praise him in every situation so that we may become successful in the life of hereafter.

"Allah Almighty says in the Quran: "O you who believe! Enter into Islam whole-heartedly; and follow not the footsteps of the Evil One; for he is to you an avowed enemy." (Al-Baqarah:208)

He Almighty also says, "Say: Truly, my prayer and my service of sacrifice, my life and my death, are (all) for Allah, the Cherisher of the Worlds; no partner has He: this am I commanded, and I am the first among those who submit to Him." (Al-An`am: 163).

Faith in Allah has everything to do with every aspect of our lives. We cannot compartmentalize religion or life. Islam requires that we live our whole life, every aspect of life in obedience to Allah. We are not part-time servants of Allah. We belong to Allah. We are for Allah, by Allah and moving towards Allah. We are His servants every moment of our life and we must live our whole life in obedience to Him. Our work, school, athletics activity, family life, economics, politics everything must be according to Allah's Rules. Whatever He Almighty has allowed is allowed for us, and whatever He Almighty has forbidden is forbidden. All His rules are for our own good and we must live by them.

There is no separation of religion and life in Islam. We must live our whole life according to our faith. We should work hard and give a good example of a servant of Allah. We should not be judgmental towards others. Rather we should be tolerant, logical, kind, and courteous towards all even with those who do not share our faith.

Our religion (Islam) is not against common sense rules and it recognizes that people of other religions and cultures also have a lot of good things and we can share with them those common values and cooperate with them."


Allah has mentioned in the Qur'an:

I have only created Jinns and men, that they may worship (or serve) Me.-Surah 51 Verse 56


Allah says in another Divine hadith:

“My servants, I didn’t create you just to keep Me company or for you to help Me accomplish a certain task, nor did I create you to acquire a benefit or to be spared a harm. I did create you for you to offer Me incessant worship, to remember always and to glorify Me day and night.”

“The chief characteristic of Islam is that it makes no distinction between the spiritual and the secular in life. Its aim is to shape both individual lives as well as society as a whole in ways that will ensure that the Kingdom of Allah may really be established on earth and that peace, contentment and well-being may fill the world. The Islamic way of life is thus based on a unique concept of man’s place in the universe.

In Islam, man’s entire individual and social life is an exercise in developing and strengthening his relationship with Allah. Man, the starting point of our religion, consists in the acceptance of this relationship by man’s intellect and will; Islam means submission to the will of Allah in all aspects of life. The Islamic code of conduct is known as the Shari`ah. Its sources are the Qur’an and the Sunnah of the Prophet, peace and blessings be on him.

The final Book of Allah and His final Messenger stand today as the repositories of this truth. Everyone who agrees that the concept of Reality stated by the Prophet, and the Glorious Book is true, should step forward and surrender himself to the will of Allah. It is this submission which is called Islam, the result of Man in actual life. And those who of their own freewill accept Allah as their Sovereign, surrender to His Divine will and undertake to regulate their lives in accordance with His commandments, are called Muslims.

The main objectives of the Shari`ah are to ensure that human life is based on good and to cleanse it of evils.”