Did someones repentance save the plane in New York? 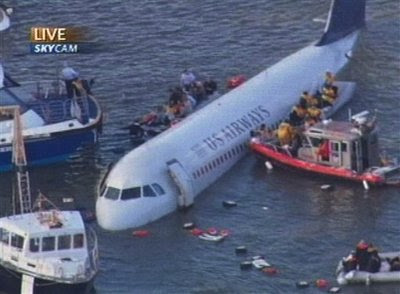 You must have all read about the miraculous survival of all the people in the Hudson plane crash that happened in New York. All 155 people on board survived and this is the first time in the history that a plane has landed successfully in water without breaking up.

This reminded me of a story that occurred during the time of prophet Musa/Moosa/Moses (pbuh). During the time of prophet Moosa (pbuh), the rain stopped for long time. When Musa (pbuh) and the people of Israel started praying to Allah, Allah informed them that there is a sinner among them because of whom the rain has stopped. That sinner has been sinning against Allah for the last 40 years. Moosa (pbuh) informed this to the people of Israel and told them that the sinner has to leave them before Allah will send rain to them. The sinner knew that it was him Allah was referring and he started repenting sincerly to Allah. He could not leave the town as people will find out he was the sinner, sinning against Allah for the last forty years. If he does not leave then all the people would die of thirst. He repented and repented sincerely and Allah forgave him and sent the rain. When Moses (pbuh) inquired, Allah told him that the person has repented and he has been forgiven. When Moosa (pbuh) asked Allah to disclose his identity, Allah said that for forty years he has protected his identity and there is no way he will reveal it now.