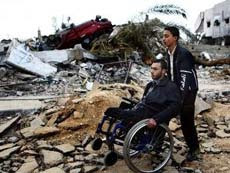 Guns might have gone silent, bodies buried, rubbles lifted, but Israel's 22-day onslaught is leaving many Gazans with life-long scars, both physical and psychological.

"I will never walk again," Ruba Hamid, 8, said from her bed in Al-Shifa hospital in Gaza City.

Her tears rolled down her cheeks as she watched on TV the many young children whose legs have been blown out in Israeli bombing.

"I will never play again," Ruba said before she stopped talking abruptly as her voice chocked with deep emotion.

Ruba's legs were amputated after being shattered by Israeli shelling of the Gaza Strip.

According to medics, thousands of Gazans, many of them children, had their bodies shredded and their limbs amputated due to the severe damage caused by Israeli shells and shrapnel.

"Most of the cases coming here were suffering from amputated limbs, four of them in some cases," doctor Mo'aweya Hasanein, chief of ambulance and emergency in Gaza, told IOL.

He estimates around 14 percent of the 5000 people injured in Gaza have become disabled for life.

"And the numbers keep rising, every day some one is losing an eye, an arm or a leg."

Arab and foreigner doctors who have been to Gaza recently have concluded that the abnormal injuries seen suggest Israel's use of unconventional weapons during its three-week onslaught.

Norwegian doctor Mads Gilbert, who worked in Gaza's main Shifa hospital during the first weeks of the Israeli blitz, accused Israel of using the Dense Inert Metal Explosive (DIME) that shreds the victims' bodies in pieces.

Walking though Shifa rooms, the screams of those who wake up to the pain of their ravaged bodies echo every few minutes.

But at Hani's room, the silence is deafening.

The 23-year-old has lost both legs in an Israeli missile strike that also left his house in tatters.

Since then, he has been laying in his hospital bed, his eyes gazing into the nowhere.

Sometimes tears roll down his face but he never speaks.

"He does not want to talk to anyone," his mother told IOL. "The doctors say he is suffering from psychological distress.

"Just look at him," said the grief-stricken mother, "he is ruined. What's to become of him now?"

Unlike Hani, Amgad has not stopped weeping and crying for hours.

"He suffers from a severe nervous breakdown," one doctor said.

Amgad who is now confined to a wheelchair after Israeli shrapnel hit his neck and left him paralyzed for life.

Psychiatrists are warning that Gazans would bear severe psychological scars for the rest of their lives.

Rehabilitation centers have already launched a campaign to scarred victims.

"We will visit the disabled in their homes and help them cope with their injuries," Mustafa Abed, spokesman of the confederation of rehabilitation centers, told IOL.

But for Ruba, the 8-year-old who lost both her legs, there is only one question that burns her mind.

"What did I do to Israel to take my legs?"