Girls aged 2 and 7: Killed in cold blood by Israeli Soldier 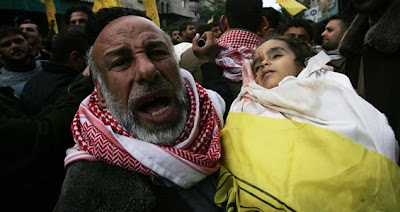 A Palestinian father has claimed that he saw two of his young daughters shot dead and another critically injured by an Israeli soldier who emerged from a stationary tank and opened fire as the family obeyed an order from the Israeli forces to leave their home.

Khaled Abed Rabbo said Amal, aged two and Suad, seven, were killed by fire from the soldier's semi-automatic rifle. His third daughter, Samer, four, has been evacuated to intensive care in a Belgian hospital after suffering critical spinal injuries which he said were inflicted in the attack early in Israel's ground offensive.

Mr Abed Rabbo stood near the wreckage off his subsequently destroyed home on the eastern edge of the northern Gaza town of Jabalya yesterday and described how a tank had parked outside the building at 12.50pm on 7 January and ordered the family in Arabic through a megaphone to leave building. He said his 60-year-old mother had also been shot at as she left waving her white headscarf with her son, daughter in law and her three grandchildren.

"Two soldiers were on the tank eating chips, then one man came out of the tank with a rifle and started shooting the kids," Mr Abed Rabbo, who receives a salary as a policeman from the Fatah-dominated Palestinian Authority in Ramallah said. The family say they think the weapon used by the soldier was an M16 and that the first to be shot was Amal. Mr Abed Rabbo said that Suad was then shot with what he claimed were 12 bullets, and then Samer.

The soldier who fired the rifle had what Mr Abed Rabbo thought were ringlets visible below his helmet, he said. The small minority of ultra-Orthodox Jews who serve in the army are in a unit which did not take part in the Gaza offensive and only a very small number of settlers who also favour that hairstyle serve in other units. 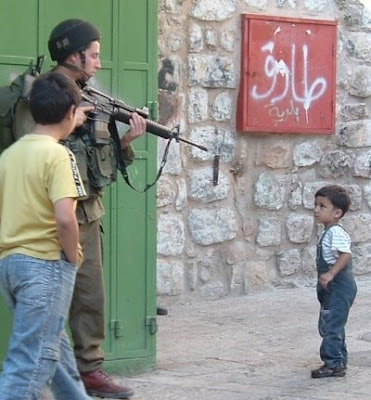 Dr Izz el-Deen Aboul Aish is a gynaecologist at Israel's Shiba Hospital near Tel Aviv, and is well known among Israeli medical colleagues and journalists.

During the 22 days of Israel's military onslaught on Gaza, the Palestinian doctor and peace advocate who speaks Hebrew fluently had helped the Israeli media cover the war by giving phone interviews from inside Gaza.

But on Friday night, Dr Aboul Aish's scheduled live interview with Israeli Channel 10 television was conducted minutes after three of his daughters were killed by an Israeli shell. His raw anguish forced Israelis to take their first real glimpse of the suffering and death caused to Palestinian civilians.

Shlomi Eldar, the Channel 10 correspondent, his own voice choking with emotion, repeatedly noted Dr Aboul Aish's connection to Shiba Hospital as he held out his mobile phone, allowing viewers to hear the physician cry and sob: "My daughters, they killed them, Oh lord, God, God, God."

"I want to save them but they are dead," Dr Aboul Aish said. In a video of the interview, available on YouTube, the physician can be heard imploring for help while a shaken Mr Eldar pleads on air for anyone in the army who might be viewing to let ambulances reach the Aboul Aish home in the Jebalya refugee camp. "Maybe something can still be saved," he said.

Helmi Samouni knelt yesterday on the floor of the bedroom he once shared with his wife and their five-month old son, scraping his fingers through a thick layer of ash and broken glass looking for mementoes of their life together. "I found a ring. I might find more," he said.

His wife Maha and their child Muhammad were killed in the second week of Israel's 22-day war in Gaza when they were shelled by Israeli forces as they took shelter nearby along with dozens of relatives. In total 48 people from one family are now known to have died that Monday morning, 5 January, in Zeitoun, on the southern outskirts of Gaza City.

Of all the horrors visited on the civilians of Gaza in this war the fate of the Samounis, a family of farmers who lived close together in simple breeze-block homes, was perhaps the gravest.

You can also read this interesting article and discussions on Al Jazeera website:
Who will save the Palestinians?