Palestinians bombing their own motherland 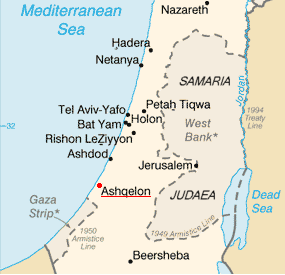 Palestinians are bombing their own motherland according to this article by Robert Fisk:

How easy it is to snap off the history of the Palestinians, to delete the narrative of their tragedy, to avoid a grotesque irony about Gaza which – in any other conflict – journalists would be writing about in their first reports: that the original, legal owners of the Israeli land on which Hamas rockets are detonating live in Gaza.

That is why Gaza exists: because the Palestinians who lived in Ashkelon and the fields around it – Askalaan in Arabic – were dispossessed from their lands in 1948 when Israel was created and ended up on the beaches of Gaza. They – or their children and grandchildren and great-grandchildren – are among the one and a half million Palestinian refugees crammed into the cesspool of Gaza, 80 per cent of whose families once lived in what is now Israel. This, historically, is the real story: most of the people of Gaza don't come from Gaza.

But watching the news shows, you'd think that history began yesterday, that a bunch of bearded anti-Semitic Islamist lunatics suddenly popped up in the slums of Gaza – a rubbish dump of destitute people of no origin – and began firing missiles into peace-loving, democratic Israel, only to meet with the righteous vengeance of the Israeli air force. The fact that the five sisters killed in Jabalya camp had grandparents who came from the very land whose more recent owners have now bombed them to death simply does not appear in the story.

Both Yitzhak Rabin and Shimon Peres said back in the 1990s that they wished Gaza would just go away, drop into the sea, and you can see why. The existence of Gaza is a permanent reminder of those hundreds of thousands of Palestinians who lost their homes to Israel, who fled or were driven out through fear or Israeli ethnic cleansing 60 years ago, when tidal waves of refugees had washed over Europe in the aftermath of the Second World War and when a bunch of Arabs kicked out of their property didn't worry the world.

Email ThisBlogThis!Share to TwitterShare to FacebookShare to Pinterest
Labels: Palestine