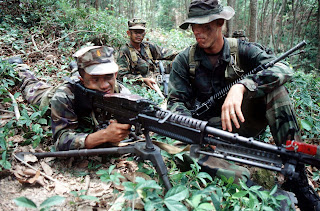 Muslims make upto 15% of the population (officially around 5%) in Thailand but they are treated as second class citizens with no fair share in jobs or education. So its not surprising that they have lots of violence and problems in the south.

So when the US trained military got a chance to kick some Muslims ass they did not want to lose the opportunity:

Beaten up to death, put on boats without engines and cut them adrift in international waters, desperate Muslim migrants are tasting humiliation at Thai coasts.

"They say they were kept on an island, they were beaten up, some were shot dead, and then they were pushed out to sea."

Muslim migrants, mostly from Myanmar and Bangladesh, told stories of humiliation at the hands of Thai forces during their travel to Malaysia for work or asylum.

"Thai army personnel used to torture them physically," said a report by the Indian security agencies based on the survivors' testimonies.

The report cites an incident in December when senior Thai officials went to an island where Muslim migrants have taken as a transit point.

"In front of them, around 9pm on the same day, the uniformed personnel started shifting all the Bangladeshis/Myanmarese, estimated at 400, to one big wooden barge which had neither engines nor sails/oars.

The wooden boat was towed by Thai coastguards for 18 hours before the migrants were forced to sail without food or water.

A few days later, nearly 300 dehydrated men jumped into the sea for survival, but only 11 made it to the shore.

"These are all poor people who were looking for work. But they were treated very harshly, inhumanely, and they were in a horrible condition," said Kailash Negi, a coastguard commandant.

More than 200,000 Myanmarese Muslims live in Bangladesh in unofficial camps. They usually use Thai coasts as a transit stop to reach Malaysia for work or asylum.

"This is not just an isolated incident," said Sunai Pasuk, with Human Rights Watch.

But Paul Quaglia, director of PSA Asia, a security consultancy in Bangkok, refutes the claim.

He said there is no evidence that the Myanmarese migrants, who speak a Bengali dialect, have joined separatists in the Malay-speaking south.

Facing harsh criticism from human rights groups, the Thai government launched a probe into the abuses of Muslim migrants.

"The military has agreed to a fact-finding investigation … [but] we're not dependent on their input alone," Panitan Wattanyagorn, a spokesman for the Thai Prime Minister Abhisit Vejjajiva, said.

But Quaglia, the PSA Asia director, said Abhisit is too weak to take any action against the military even if it was proved guilty.

"Abhisit is ... beholden to the military for getting his job – and keeping his job," he said.