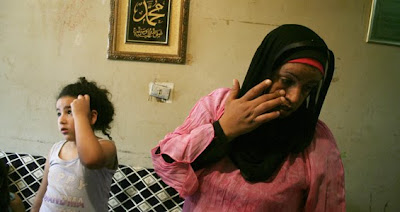 Two reports from Al-Jazeera and The Independant:

"We thought we would be here for a few months," says Huda al-Rukun, her red-rimmed eyes flicking around the tiny space she shares with her husband and five children. "No-one believed we would stay this long."

Twenty-three years after they were forced out of the nearby Shatila refugee camp during a particularly bloody phase of the Lebanese civil war known as the War of the Camps, the Palestinian al-Rukun family are one of hundreds still living in a disused hospital in south Beirut.

The conflict may have finished 19 years ago, but many of those who fled the fighting have not been allowed back. Rebuilding was only permitted on the original site of camp, so those who had lived in the unofficial settlements attached to Shatila found themselves homeless.
Instead of returning to the camp, those families have spent the past quarter of a century squatting in the hospital complex, known locally as the Gaza buildings. This "temporary" shelter has become a permanent slum, housing almost a thousand people.

It is just a short taxi ride from downtown Beirut, but the buildings' crumbling rooms make the city's bright lights and trendy beach clubs seem a distant memory. Some of its residents live without running water, others without regular electricity. All are desperately poor.

The community is known as a "gathering," the name given to any informal Palestinian settlement outside Lebanon's 12 official camps.

Officials say that almost half of the 400,000 Palestinians in Lebanon now live in gatherings, where they are particularly vulnerable to poverty and ill-health.

"Palestinians in Lebanon live with a very high unemployment rate, and have limited access to public services and to the job market. This makes them poorer than Palestinians living in other countries," says Hoda el Turk, a spokeswoman for the UN Relief and Works Agency (UNRWA) in Lebanon, which is tasked with providing services for Palestinian refugees.

She says those living outside the camps are not eligible for some of the essential services provided by the agency. "They cannot have their shelter rehabilitated by UNRWA because they are outside the camps, where UNRWA has no mandate to work," she explains.

As a result, living conditions in Palestinian gatherings are often dire. The EU recently paid for improvements to the Gaza buildings, but walking through the main entrance to the al-Rukuns' building, you would not know it.

Electricity cables loop from the ceiling in the corridors, dropping dangerously close to the puddles of stagnant water that gather on the bare concrete floors. Rubbish piles up in the disused lift shafts, infusing the place with a permanent stench of decay, and a trickle of foul-smelling liquid drips down the staircase from an unseen source.

Inside the family's two spartan rooms on the fourth floor, there have been efforts to brighten things up. A threadbare rug lies on the floor, and a carefully placed picture frame covers the worst of a crack in the wall. But it is hard to escape the squalor of the buildings; refuse is piled up on the flat roof outside the window, rotting in the late summer heat.

"The only good thing about this place is that we don't pay rent," Huda says, watching her youngest children playing together on the floor.

It is a cynical but time-honoured practice in Middle Eastern politics: the statesmen who decry the political and humanitarian crisis of the approximately 3.9 million Palestinians in the Israeli-occupied West Bank and in Gaza ignore the plight of an estimated 4.6 million Palestinians who live in Arab countries. For decades, Arab governments have justified their decision to maintain millions of stateless Palestinians as refugees in squalid camps as a means of applying pressure to Israel. The refugee problem will be solved, they say, when Israel agrees to let the Palestinians have their own state.

Yet in the two decades since the end of the Cold War, after two Gulf wars, and the rise and fall of the Oslo peace process, not a single Palestinian refugee has returned to Israel – and only a handful of ageing political functionaries have returned from neighbouring Arab countries to the West Bank and Gaza. Instead, failed peace plans and shifting political priorities have resulted in a second Palestinian "Nakba", or catastrophe – this one at hands of the Arab governments. "Marginalised, deprived of basic political and economic rights, trapped in the camps, bereft of realistic prospects, heavily armed and standing atop multiple fault lines," a report by the International Crisis Group (ICG) in Lebanon recently observed, "the refugee population constitutes a time bomb."

In 2001, Palestinians in Lebanon were stripped of the right to own property, or to pass on the property that they already owned to their children – and banned from working as doctors, lawyers, pharmacists or in 20 other professions. Even the Palestinian refugee community in Jordan, historically the most welcoming Arab state, has reason to feel insecure in the face of official threats to revoke their citizenship. The systematic refusal of Arab governments to grant basic human rights to Palestinians who are born and die in their countries – combined with periodic mass expulsions of entire Palestinian communities – recalls the treatment of Jews in medieval Europe. Along with dispossession and marginalisation has come a new and frightening turn away from the traditional forms of nationalism that once dominated the refugee camps towards the radical pan-Islamic ideology of al-Qa'ida.

Daniel C Kurtzer, who has served as US ambassador to both Israel and Egypt and now advises the Obama administration, says that all American governments have resisted dealing with what he calls the most sensitive issue in the conflict – the normalisation of the status of the Palestinians – through a right of return to Palestine, or citizenship in other countries. "The refugees hold the key to this conflict's settlement," he says, "and nobody knows what to do with them."

In the unlikely event that President Obama's vision of a swift and final settlement of the Israeli-Palestinian conflict materialises, millions of Palestinians would still live in decaying refugee camps whose inhabitants are forbidden from owning land or participating in normal economic life. The only governing authority that Palestinians living in the camps have ever known is UNRWA – the United Nations Relief and Works Agency. Established by the UN on 8 December 1949 to assist 650,000 impoverished Palestinian refugees from the 1948 war, UNRWA has been battling budget cuts and strikes among its employees as it struggles to provide subsidies and services to Palestinian refugees, who are defined as "persons whose normal place of residence was Palestine between June 1946 and May 1948".