Parvez Rasool: Cricketer, not a terrorist 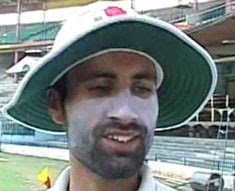 The superb innings he has played in Bangalore ensures that Parvez Rassol will have at least some happy memories of his trip to Karnataka.

The young Kashmiri cricketer arrived in Bangalore last weekend for an Under-22 cricket tournament, but was arrested by the Karnataka police who said traces of explosives were detected in his bag. Furious team-mates blamed the police for treating him like a terrorist, just because he's a Kashmiri. Parvez was released for lack of evidence.

And then he got down to business. 68 runs for Jammu and Kashmir's Under 22 team on the opening day of the match against Karnataka - putting his team in control.

Parvez explains how tough it was to block out what happened off the field. "What happened was wrong. I just want to say that this was an unfortunate incident. What happened was God's will - that is all. The first day when the police took me away, I felt pressure. The second day it was less. Then during the next two days, I began concentrating only on the game."

His team wore black bands during the match to express their anger. Coach Abdul Quayoom says cricket officials in Karnataka showed no team spirit. "I think they could at least have sent an official to the police station with me, but nobody came. Or at least they could have come and told the boys don't be frightened - we are with you. But nothing like that happened."

Parvez's bag was sent to the Forensic Science Laboratory for testing - and results are still awaited. Meanwhile, his team is doing well on the second day of its test match, exacting what they describe as their revenge.
Posted by Zafar Khan at 10:32