Dont Be Sad: Find consolation by remembering the afflicted 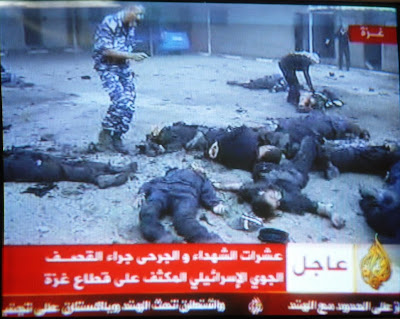 Look around you, to the right and to the left. Do you not see the afflicted and the unfortunate? In every house there is mourning and upon every cheek run tears.

How many tribulations and how many people persevere with patience? You are not alone in your troubles, which are few compared to those of others. How many sick people remain bedridden for years while suffering from unspeakable pain?

How many have not seen the light of the sun for years due to their imprisonment, having knowledge of nothing but the four corners of their cell?

How many men and women have lost their dear children in the prime of youth?

How many people are troubled or tormented?

Find consolation with those that are worse off than you; know that this life is like a prison for the believer, an abode of grief and sadness. In the morning castles are bustling with inhabitants; then in an instant, disaster occurs, and they are empty and desolate. Life can be peaceful, the body in good health, wealth abundant, and children healthy; and yet in only a matter of days, poverty, death, separation, and sickness can all take their place.

{And you dwelt in the dwellings of men who wronged themselves, and it was clear to you how We had dealt with them. And We put forth [many] parables for you.} (Qur’an 14. 45)

You must adapt like the experienced camel, which manages, when necessary, to kneel upon a rock. You must also compare your difficulties with the difficulties of those around you, and with those that have come before you: you should realize that you are in good shape relative to them, and that you have merely been pricked by tiny difficulties. So praise Allah for His kindness, be thankful for what He has left for you, seek recompense from Him for what He has taken, and seek consolation with those that are afflicted.

You have a perfect example in the Prophet (bpuh). The entrails of a camel were placed upon his head; his feet bled; his face was fractured; he was besieged in a mountain pass until he was forced to eat tree leaves; he was driven out of Makkah; his front tooth was broken in battle; his innocent wife was accused of wrongdoing; seventy of his Companions were killed; he was bereaved of his son and of most of his daughters; he would tie a stone around his stomach to lessen the pangs of hunger; and he was accused of being a poet, a magician, a soothsayer, a madman, and a liar — all at the same time. Yet Allah protected him throughout these severe trials and tribulations. Prophet Zakariyah (Zacharia) was killed, Prophet Yahya (John) was slaughtered, Prophet Moosa (Moses) was afflicted with great trials, Prophet Ibraheem (Abraham) was thrown in the fire, (may peace be upon them all), and the Imams of righteousness followed them upon this path. ‘Umar was assassinated, as was ‘Uthmaan and ‘Ali (may Allah be pleased with them all). Many scholars of the past have been flogged, imprisoned, or tortured.

{Or think you that you will enter Paradise without such [finals] as came to those who passed away before you? They were afflicted with severe poverty ailments and were shaken.} (Qur’an 2: 214)