1/4th of the world's population is now Muslim 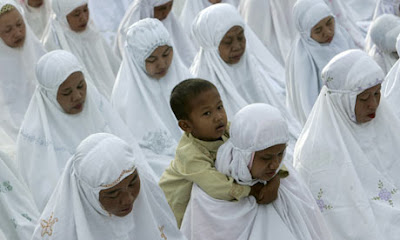 Islam may be most closely associated with the Middle East, where it emerged in Arabia in the seventh century, but today the region is home to only one in five of the world's Muslims, according to a study of the religion's global distribution.

The world's Muslim population stands at 1.57 billion, meaning that nearly one in four people practise Islam, according to the US Pew Forum on Religion and Public Life, which published the survey. This compares to 2.25 billion Christians.

The top five Muslim countries in the world include only one in the Middle East ‑ Egypt ‑ behind Indonesia, Pakistan, India and Bangladesh, in that order. Russia, the survey shows, has more Muslims than the populations of Libya and Jordan combined. Germany has more Muslims than Lebanon. China has a bigger Muslim population than Syria.

The work, the largest of its kind, was the result of three years of research examining data from 232 countries and territories.

The reality, as described by Mapping the Global Muslim Population, is that two out of three Muslims are Asians, while the 38 million Muslims in Europe, if treated as a separate group, would be the ninth largest in the world, behind Turkey, with a population of 71 million, and ahead of Algeria, with 34 million.

Pew Forum, in consultation with nearly 50 demographers and social scientists at universities and research centres around the world, analysed about 1,500 sources, including census reports, demographic studies and general population surveys, to arrive at their figures.

The research is the first step in projecting growth trends in the world's Muslim population, and a similar survey is planned by the Pew Forum on the distribution of Christians.

"This whole idea that Muslims are Arabs and Arabs are Muslims is really just obliterated by this report," said Amaney Jamal, an assistant professor of politics at Princeton University.

"There are these countries that we don't think of as Muslim at all, and yet they have very sizeable numbers of Muslims," said Alan Cooperman, associate director of research for the Pew Forum, naming India, Russia and China.

Islam had a huge geographic reach ‑ from the Atlantic coast to central Asia ‑ within a century of the prophet Muhammad's death, but until now its modern global profile was based on rough estimates.

The Pew Forum study depicts the world's second largest religion as complex and nuanced, challenging the notion that its trajectory is defined by a minority of Islamists.

Significantly, one in five of Muslims now lives in a country where they are represented as a religious minority, with three-quarters of that number concentrated in five countries: India (161 million), Ethiopia (28 million), China (22 million), Russia (16 million) and Tanzania (13 million).

The survey also attempted to quantify the relative sizes of the two main branches of Islam - Sunni and Shia - but came up against the difficulty that many national demographers did not distinguish between the two. It ended up suggesting that Shias, concentrated largely in four countries including Iran and Pakistan, probably made up between 10 and 13% of Muslims.

You can see complete map of the Muslim World here.
Posted by Zafar Khan at 13:39