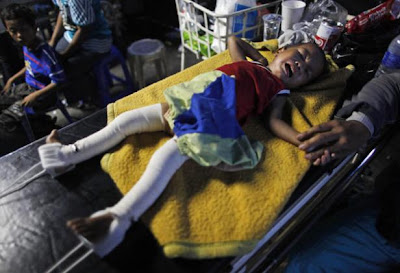 In rural areas of Indonesia, weddings are communal, open-air affairs. Some 400 people attended the nuptials of a couple in Pulau Aiya, a village outside Padang, last Wednesday. Then the ground shook and swallowed everyone up.

"They were sucked 30m deep into the earth," Rustam Pakaya, head of the Indonesian Health Ministry's crisis centre, said yesterday. "Even the mosque's minaret, more than 20m tall, disappeared."

Three days after a 7.6-magnitude earthquake devastated Padang and surrounding areas on the west coast of Sumatra, the full impact of the tragedy is starting to become clear. Whole villages were found obliterated yesterday by rescuers pushing deeper into the disaster zone, where roads remain cut off and survivors – still desperately awaiting aid – are subsisting on coconut milk.

The official death toll from Wednesday's quake stood at 809 last night, but the Indonesian Red Cross believes up to 4,000 people are lying beneath the rubble of collapsed buildings. The chances of finding more survivors are receding by the hour. Rescuers, boosted by teams from Britain, Australia and Japan, among other countries, are pulling out body after body. The morgues are overflowing.

Still, extraordinary stories of survival are continuing to emerge. "Please help, I'm trapped, my position is in the house by the stairs." That brief text message, sent to his father in Jakarta nearly 600 miles away, saved Johnson Chandra's life after a four-storey building in Padang toppled, trapping him and his wife.

Mr Chandra tried without success to call relatives and friends on his mobile phone. "I was desperate," he said. "But I suddenly thought about texting, so I texted my dad to let him know where I was. Later I heard people coming, so I tried to make a sound. I found a small nail and started banging it. They finally found me. Slowly they broke concrete around me, and I was rescued 10 hours after the quake."

Another text was sent from the bowels of the Ambacang Hotel in Padang, but with a less happy outcome. Rescuers tunnelled through the ruins of the Dutch colonial-era hotel yesterday after the message alerted them to eight people alive inside. But sniffer dogs found no signs of life. 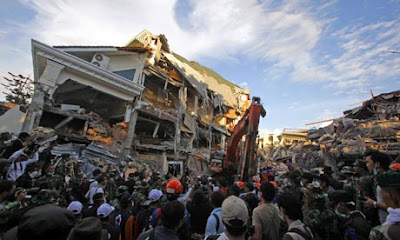 Rescue workers reported yesterday that entire villages had been sucked under the earth after the the devastating earthquake that hammered western Sumatra, estimating that at last 600 people had lost their lives in the countryside surrounding Pandang.

The dead included those attending a large wedding party numbering several hundreds. If the figure is confirmed, it would bring the total death toll to above 1,300. More than 3,000 people were listed as missing before the news about the villages emerged.

In Pandang itself, a colonial-era hotel became the national focus for hopes that survivors might still be found .

In dramatic scenes, rescuers dug for eight guests and staff rumoured to be alive in the wreckage of the city's Ambacang hotel.

At the hotel, a prominent landmark in the university town of 900,000, the rescue efforts were inspired by a text message sent by a victim to his family on Friday. The message, delivered as rescue workers attempted to burrow their way through rubble and masonry, said simply: "Be careful that the excavator doesn't cause the building to collapse on us."

The once grand, 140-room hotel complex was destroyed by the earthquake, but relatives and locals gathered outside as rescuers searched among the rubble for the survivors they believed could be trapped between the fifth and sixth floors. Jul, who worked as a waiter in the hotel's restaurant downstairs, said he did not believe anyone could still be alive in the wreckage. "I think seven people I know are inside. Inside somewhere. Alive? I don't think so," he said.

The cavity of the KFC restaurant on the ground floor remained largely untouched. Tables still stood and food, abandoned in panic, still sat on them. "We estimate there are still eight people trapped alive under Ambacang Hotel," Colonel Boy Rafli Amar told reporters. "We are still trying hard to evacuate them," Private Harmen told the Observer. He believed the operation had moved from rescue to recovery. "The last text message was at 5pm yesterday. I do not think they are alive any more."

In the countryside, as rescuers finally reached remoter areas, they discovered that at least three villages had disappeared.