Gender mixing in pursuit of knowledge permissible in Shariah 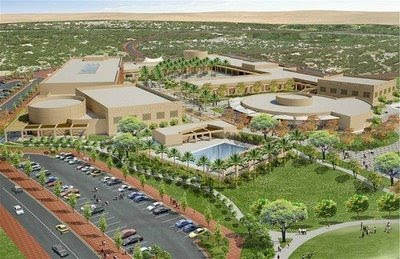 Some of the most noted scholars in the Islamic world have added their voices of support this week to those of senior sheikhs in the Kingdom for King Abdullah University of Science and Technology.

Earlier this month the Secretary General of the Board of Senior Ulema in Saudi Arabia spoke of Kaust as a “beacon of science and welfare for the entire world”, following another member of the board, Sheikh Abdullah Suleiman Al-Mane’e, who had earlier described the university as a step toward “the Islamic World recovering its leading role in science”.

In the last few days the head of the International Union for Muslim Scholars, Yousef Al-Qaradawi, put forward his views, and now the Grand Mufti of Egypt, Ali Jum’ah, has given his backing.

Scholars from both the Kingdom and abroad have been keen to make known their stances following controversy in the media concerning coeducation at KAUST, and the Grand Mufti is of firm conviction on the subject.

Coeducation permissible
“There is no harm in co-education between male and female students within Shariah rules and within a learning environment. This is permissible according to Shariah,” Al-Jum’ah told Okaz. “The university will unquestionably take into consideration the morals and rules of Shariah Law because the Kingdom is earnest in this area,” he said.

“In early Islamic practices and thereafter, the mere presence of men and women in the same place was not forbidden (haraam) in itself,” he continued.

“It is forbidden in a social setting if there are violations of the Shariah, such as women revealing parts that ought not to be seen according to Shariah, or if gatherings are conducted to practice a vice (munkar), or if there is illicit seclusion (khulwa). These conditions, however, do not apply to places of learning where the basic intention is to seek knowledge, following the saying of the Prophet (peace be upon him): ‘Seeking knowledge is an obligation for every Muslim.’”
When asked to cite further from the Prophet’s Sunnah, Jum’ah gave four instances from the Prophet’s time and the explanations of religious scholars like Al-Imam Al-Bukhari and Al-Qurtubi, such as permitting a wife to serve her husband and his associates.

“Explaining that Hadith from Al-Imam Al-Bukhari, Ibn Al-Battal said: ‘Separation of women from men in terms of place or in direct dealings is not obligatory for the women of the believers, but only applies to the wives of the Prophet (peace be upon him),’” Al-Jum’ah said.
“It is also permissible for a man to speak to an unrelated woman to ask her about issues if they are of public benefit,” he said.

“The Muslim woman used to join men in public social life while abiding by Shariah Law in dress and keeping to Islamic rules and morals. Some females among the companions of the Prophet (peace be upon him) used to enjoin virtue and prevent vice, such as Samra Bint Nuhaik, who wore thick clothes and a veil, and used to hold a whip, teach people morals, and promote virtue and prevent vice.”

“As to men receiving Shariah knowledge from women and from a knowledgeable woman, an example is found in the wives of the Prophet (peace be upon him) who used to spread religious knowledge and propagate the religion. Men and women mixing to seek knowledge while abiding by Islamic Shariah morals is permissible according to Shariah.”

Undeniable
“Nobody can deny the permissibility of coeducation to seek knowledge,” Al-Jum’ah concluded. “It is based on evidence from the Prophet’s Sunnah and Islamic history, and it is wrong to let inherited customs and traditions from a particular time and place govern religion and the Shariah. On the contrary, the Shariah should supersede them, and not the other way round.”
The Grand Mufti was effusive in his praise for King Abdullah’s initiatives, describing them as “courageous” and “steadfast and strong” in their support for “dialogue and interaction with others”.

“It follows the standpoint of Islam’s call for cooperation with others and not isolating or cocooning ourselves,” he said.
“Civilizations do not clash as some mistakenly claim, instead they cooperate and help one another for the wellbeing and benefit of all mankind. For this reason, everyone should follow the morals and ethics of dialogue, and no rational person would speak of the clash of civilizations since dialogue is the correct path. It should therefore be based on a humanitarian method.”

Aggressors
“Throughout the ages there has been an onslaught by the aggressors against Almighty Allah, His messengers and prophets, His revealed books and the Islamic Shariah since its emergence to this day,” Al-Jum’ah continued.

The reason for the aggression could be due to malice, or for political interest or the desire to hold to this worldly life that has blinded them from the truth and the Hereafter.”
“The latent goal of the continued insults against the Prophet (peace be upon him) and Islam is to keep Muslims preoccupied and distracted from their duty that Allah Almighty has delegated to them,” Al-Jum’ah said. “It is to keep them occupied with marginal battles and lead the Muslim Ummah from moderation to some kind of overstepping of all bounds and away from the call to Almighty Allah, which brings happiness in this world and the Hereafter, as well as the approach of the Prophet (pbuh) which he left behind for us to follow.”

Sheikh Yousef Al-Qaradawi, head of the International Union for Muslim Scholars, spoke of Kaust and co-education in an interview with Al-Madina newspaper Thursday.

Describing the facility as an “edifice of science”, Al-Qaradawi said Kaust would contribute to the “renaissance of the Ummah and its advancement”. “Islam does not forbid the mixing of the sexes as long as it is conducted according to Shariah,” Al-Qaradawi said. “There must be shared contributions and cooperation in what’s good.”

Many of Al-Qaradawi’s observations reflected those of Grand Mufti Al-Jum’ah, but the sheikh made several observations on the situation of Muslim women in general.

“Muslim women have been treated unfairly by Westernized persons who want to force Western traditions on them like corruption and disintegration of values, and straying from the right path,” he told Al-Madina.

“They have also been wronged by those who want to impose on her other traditions, this time from the East, not the west, and which have often been portrayed as religious traditions.”
Al-Qaradawi added that the word “Ikhtilaat” – mixing (of the sexes) – was unknown in previous centuries to the Islamic lexicon, suggesting that it had perhaps arrived through “translation of a foreign word”.

u Sheikh Fahd Bin Sa’ad Al-Majed, Secretary General of the Board of Senior Ulema, described Kaust last week as a “beacon of science and welfare for the entire world”.

Speaking to Okaz, Al-Majed said King Abdullah had brought in “huge advances” by doubling of the number of universities in the Kingdom and encouraging “healthy competition”. “Kaust will serve to end the stereotypical propaganda and incorrect misconceptions about Islam by presenting the true image of Islam as a religion of knowledge and civilization,” Al-Majed said.
Al-Majed continued by describing the Islamic World as “suffering from cultural resistance in education, health and welfare, as well as different visions and motives”.

“Those following the efforts of the King can clearly see what he is doing to tackle these faults,” Al-Majed said.

“He has brought in moves to address the situation of Muslims in political, intellectual and social areas, as seen in his continued efforts to reform the judiciary and education, as well as the personal interest he takes in improving scientific research to serve Islam and Muslims.”

u Sheikh Abdullah Suleiman Al-Mane’e of the Board of Senior Ulema has also praised the Kaust venture in the last month, saying it would be a step towards “the Islamic World to recovering its leading role in science”. “King Abdullah,” Al-Mane’e said, was a “pioneer and great leader not only in the Islamic World but in the entire world.” – SG
Posted by Zafar Khan at 19:09