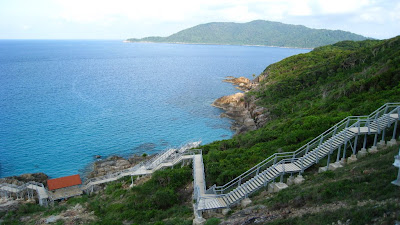 A Malaysian state is offering free second honeymoons for couples on the brink of divorce, hoping that romantic getaways will help rekindle their marriages, an official said Monday.

Under the ambitious plan, feuding couples will spend three days and two nights on one of the tropical islands off Terengganu state, said government official Ashaari Idris.

"Newly-wed couples are facing numerous problems. Among them are financial issues and problems related to their in-laws," said Ashaari, the state's welfare, community development and women affairs committee chairman.

"Before marriage, all was good. But after marriage, some are unable to cope with the new challenges," he told AFP.

"I want to strengthen family ties. If a marriage breaks down, it will hurt the children and it will have serious implications on society."

Couples will have to make an application and then undergo an interview before being accepted for the package which is worth an estimated 1,500 ringgit (440 dollars).

Ashaari said the state had already carried out a successful pilot project involving some 25 couples who faced marital woes.

He said that divorce rates in the Muslim-majority northeastern state were among the lowest in the country.