Dont Be Sad: Extract the honey but do not break the hive 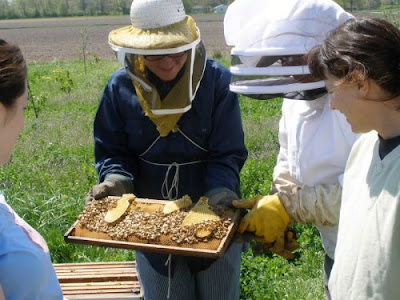 Everything that has gentleness in it is beautified, and whatever lacks it is spoiled. When you meet someone, giving him a bright smile and a kind word, you are displaying a characteristic of the truly successful man, a characteristic that even a bee exhibits. When a bee lands on a flower (doing so for a practical purpose) it does not destroy it, because Allah rewards gentleness with that which He does not give for harshness. There are certain people whose personalities are like magnets, attracting everyone who is nearby, simply because they are loved for their gentle talk, their good manners, and their noble deeds.

Winning the friendship of others is an art that is mastered by those that are noble and pious; a circle of people constantly surrounds them. Their mere presence in a gathering is a blessing, and when they are absent they are missed and asked about.

These blessed people have a code of conduct entitled:

{Repel [the evil] with one which is better [i.e. Allah ordered the faithful believers to be patient at the time of anger, and to excuse those who treat them badly], then verily! He, between whom and you there was enmity [will become] as though he was a close friend.} (Qur’an 41. 34)

They suck out malice from others with their sincerity, forgiveness, and gentleness. They forget evil that was enacted upon them and preserve the memory of kindnesses received. Biting, harsh words may be aimed at them, but such words pass by their ears without entering and continue on their path without ever returning. They are in a state of calmness. People in general, and Muslims in particular, are safe from suffering any harm at their hands. The Prophet (Blessings and Peace be upon him) said:

“The Muslim is the person whose tongue and hand do not harm other Muslims. And the Believer is he whom others trust, with their blood and wealth.”

“Verily, Allah ordered me to keep relations with those that cut me off, to forgive the one who does an injustice with me, and to give to those who withhold from me.”

{Those who repress anger, and who pardon men; verily Allah loves the good-doers.} (Qur’an 3: 134)

Give to such people glad tidings of an imminent reward in this world, in terms of peace and tranquility.

Also give glad tidings to them of a great reward in the Hereafter, of Paradise, wherein they will be in close proximity to their forgiving Lord.