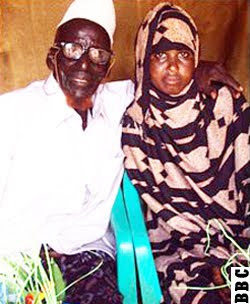 A MAN claiming to be 112 married a 17-year-old at a ceremony in central Somalia, his sixth wedding in total but his first in three quarters of a century, he said Thursday.

"My wife is ten times younger than me but we love each other so much and I believe that I can give her the kind of love that not any young man can offer," Ahmed Mohamed Dhore told AFP.

"Married life is about love and passion rather than age and beauty," said the centenarian, whose wedding ceremony in the town of Guriel was attended by hundreds on Wednesday.

"The first time I got married was so long ago I cannot remember and the last time must have been about 75 years ago, I was still a young man," he said.

Dhore - who already has 13 children by five wives - said he would like to have more with his new wife, Safia Abdulleh.

"Today God helped me realise my dream," he said, after the wedding in the region of Galguduud.
The bride's family said she was "happy with her new husband", according to the BBC.

Dhore said he and his bride - who is young enough to be his great-great-grand-daughter - were from the same village in Somalia and that he had waited for her to grow up to propose.

"I didn't force her, but used my experience to convince her of my love; and then we agreed to marry," the groom said.

Dhore would have already been an adult when the nationalist leader "Mad Mullah," Mohammed Abdullah Hassan, who fought the British empire and created the Dervish state died in 1920.

He said the secret to a longevity spanning three different centuries was "healthy food when he was young".

"I'm 112 and can live the life of a youngster... The idea to get married again came from my children and grand-children," he said, explaining that his only other surviving wife was 90 and ailing.

According to statistics by international aid and development agencies, the average life expectancy of a Somali male is 47.
Posted by Zafar Khan at 21:02