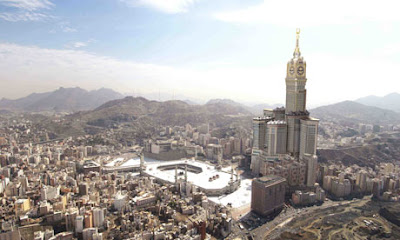 The pilgrimage to Mecca has always involved hardship and sacrifice, whether months spent travelling on foot through barren valleys and sleeping in the open with no shelter from the elements or stripping oneself of earthly trappings. But help is at hand for the pilgrim who cannot bear to be without comfort while executing the fifth pillar of Islam.

Raffles, which gave thirsty wanderers the Singapore Sling, is opening a luxury hotel in Mecca offering pilgrims a coffee sommelier, a chocolate room where chefs will prepare bespoke pralines and truffles, and a 24-hour butler service.

Undeterred by restrictions on beautifying oneself during the Hajj, the hotel will also have segregated gyms, beauty parlours, grooming salons and a spa.

There are strict rules regarding personal hygiene and behaviour during the hajj, and forbidden activities include sex, the cutting of hair and nails and the trimming of beards. These bars are lifted once certain rituals are complete, but Muslims are generally expected to forget worldly thoughts and activities and focus on the divine.

Mohammed Arkobi, the general manager of the new hotel, did not explain how a chocolate room and spa would help pilgrims achieve spiritual fulfilment. Nor was he able to comment on how the amenities complied with the ethos of the hajj, which is about simplicity and humility.

But he did say that the "comprehensive range of services" were designed to meet the needs of the "discerning" travellers they were targeting.

"Ultimately, the hotel's sophisticated ambience, our range of features and highly personalised service delivery such as those offered through our 24-hour butler service will help to ensure that our residents' overall experience will be enriching."

Arkobi said the hotel was a three-minute walk away from the Grand Mosque, the Masjid al-Haram, and that a "spacious outdoor dining terrace" would provide direct views of it.

It is being developed by the Saudi Binladin Company, one of the largest construction firms in the Arab world, which has also been responsible for overseeing the expansion of the holy mosques in Mecca and Medina. The company was set up by Mohammed bin Laden, father of Osama, although the family is now estranged from its most infamous son.

Around 4 million people visit Mecca for hajj, with millions more passing through the rest of the year to perform the lesser pilgrimage. Estimates for future numbers vary wildly – from 10 million to 20 million – and the landscape of Mecca has undergone a dramatic transformation over the decades to cope with demand. Homes have been bulldozed, mountains flattened and historic sites razed to provide more hotel rooms and amenities.

One development that will dominate the skyline and the Grand Mosque is the Makkah Royal Clock Tower, operated by international hoteliers Fairmont, which is majority owned by a company chaired by HRH Prince Alwaleed bin Talal bin Abdulaziz Alsaud, the Saudi king's nephew.

The tower will be among the tallest in the world, 577 metres (1,893ft) high on completion, and its dimensions, including a clockface measuring 40 metres across that will be visible 10 miles away, make it five times larger than Big Ben.

In addition to 1,005 guest rooms, the tower will also house a lunar observation centre and Islamic museum. It lies in the massive Abraj Al Bait complex, part of the King Abdul Aziz endowment project aimed at upgrading the precincts of Mecca and Medina.

Mecca's makeover is alarming international activists, such as Ali al-Ahmed, the director of the Washington-based Institute for Gulf Affairs, a thinktank analysing events and issues in the region. Ahmed, an outspoken critic of the Saudi regime, said many factors were driving the changes.

He also expressed concern that the arrival of luxury brands would increase the price of a pilgrimage. A 2009 platinum Hajj package from a UK tour operator costs £6,400 for 16 nights full board, based on double occupancy.

"By developing Mecca in this way they are making it inaccessible and unaffordable for the majority of Muslims. It will only be for the elite," Ahmed said.

The city's increasing westernisation was a "perversion of the religion", encouraging activities that were at odds with the spirit of the hajj, he said.

"The Saudis may come across as austere but members of the ruling class have billions of dollars between them – even the muftis live in palaces with chandeliers."

Development of the holy cities of Mecca and Medina should not come at the expense of religious practice, he said, before turning his attention to the lack of protest from Muslims around the world.

"Let's take Jerusalem as an example. Muslims are outraged when Israelis do something in the Old City, but in Mecca things are being systematically destroyed and nobody is raising an eyebrow. It is a catastrophe."