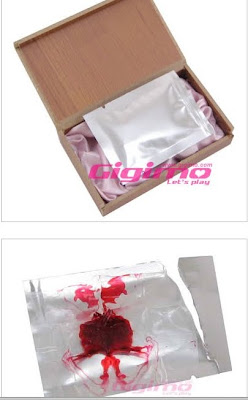 Egyptian MPs have backed calls to ban the importation of a device which can help a woman to fake virginity.

The Artificial Virginity Hymen kit, distributed by a Chinese company, costs about £20. It is intended to help new brides fool their husbands into believing they are virgins, which is culturally important in conservative Arab countries like Egypt.

The device releases liquid that looks like blood, allowing a newlywed woman to feign virginity on her wedding night. The contraption is seen as a cheap and simple alternative to hymen repair surgery, which is carried out in secret by some clinics in the Middle East.

Sheik Sayed Askar, a member of Egypt's Muslim Brotherhood who is on the parliamentary religious affairs committee, said the kit would make it easier for Egyptian women to give in to temptation. He demanded the government take responsibility for fighting the product to uphold Arab values.

Email ThisBlogThis!Share to TwitterShare to FacebookShare to Pinterest
Labels: Egypt