Rape in the news 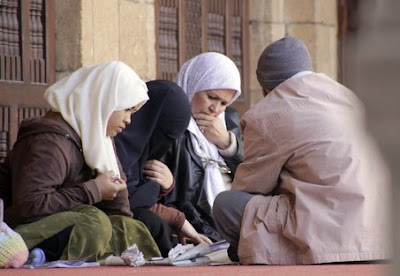 I came across this very interesting article about rape victims in UK:

This is Britain in the spring of 2009. An estimated 47,000 women are raped in this country every year. Between 75% and 95% of them will never report their attack. Of those who do, only a quarter make it to court, and there face an abject conviction rate of 6.5%. By my most conservative calculations, this results in 764 of those 11,750 ever seeing justice done.

This is Britain in the spring of 2009. We are not some UN-designated failed state. We have a criminal justice system that operates reasonably effectively for pretty much everybody else. But 191 women this year will see justice done. And 46,809 will not. I refuse to believe that all of them are lying.
~~~~~~~~~~~~~

In Islam we see rape as a serious crime. Rape includes marital rape which is not considered serious crime in some Islamic socities. In Afghanistan recently Marital rape was decriminalised by the government and there have been protests to reverse this law:

The legislation restricts a woman's right to leave her home and demands she submit to her husband's sexual desires. Sima Ghani, one of the women's organisers, said: "This law is against Islam and it's against women. It's against the people of Afghanistan."

Dozens of riot police, backed by more than 50 elite counter-terrorism officers, struggled to keep the groups apart as hordes of men charged at the protesters, who had taken to the streets near Afghanistan's parliament.

At one point the women , who were marching to parliament to deliver a petition, were pelted with stones. Men chanted "long live Islam" and spat at the women who had assembled outside a mosque built by Ayatollah Mohseni, the Shia cleric who helped draft the law. At a separate demonstration, police fired into the air to disperse a mob surrounding a school accused of organising the protests.

Most of those protesting against the law were young Shia women who took to the streets despite the threat of violence. Earlier this week, one of Afghanistan's leading women's rights activists was murdered at her home.

The UN has warned that a number of women have already received death threats for speaking out against the Shia Family Law, which President Hamid Karzai signed last month.

Most of the men were part of a counter-demonstration. Hundreds of them charged at riot police while a cordon of female police officers held hands in a ring around the women, to try to protect them.

"Women have God-given rights," said Ms Ghani. "But these men are claiming those rights in the name of culture. It is against everything God has ever given us."

Both groups chanted "Allah Akbar," or God is great. The men called the women "un-Islamic dogs" in a series of abusive chants. Others screamed "death to America". In reply, the women cried: "Afghanistan is a country of lionesses. We want our rights."
~~~~~~~~~~~~~

“The relations between the spouses should be based on tranquility, love and mercy. Allah says, "And among His Signs is this, that He created for you mates from among yourselves, that you may dwell in tranquility with them, and He has put love and mercy between your (hearts): verily in that are Signs for those who reflect." (al-Rum 30:21)

Tranquility (sukun), love (mawaddah) and mercy (rahmah): these are very important concepts in Islam. These three summarize the ideals of Islamic marriage. It is the duty of the husband and wife to see that they are a source of comfort and tranquility for each other. They should do everything physically, emotionally and spiritually to make each other feel happy and comfortable. They must care for each other. They should not inflict any harm or injury, neither physically nor verbally, to each other. In order to increase the tranquility and comfort in their relations and in their home, they should love each other and should have mercy and kindness for each other.
Loving and merciful relationship is an important ingredient of a good marriage and good family life.

In Islamic marriage, neither the husband is allowed to demand his wife what is forbidden by Allah and what is harsh and unseemly, nor the wife is allowed to demand her husband to do anything that Allah has forbidden and what would put undue burden upon her husband. Sex is a natural urge and desire. Islam allows sexual intercourse only among the married couples. Fornication and adultery are forbidden in Islam. Since according to Islam there is no other permissible way for this desire to be fulfilled except between the spouses, they must be considerate to each other.

The Shari`ah has given us two important principles in this matter. (1) The first principle is that the husband should not deny himself to his wife and the wife also should not deny herself to her husband. They should do their best to satisfy their marriage partner. Even during the menses or post childbirth bleeding, when intercourse is forbidden, husband and wife can be together and can enjoy affection and intimacy in other ways.

(2) The second principle is that in their conjugal relations the couples should be kind and considerate. There are some Ahadith that report that the Prophet, peace and blessings be upon him, disapproved when he heard that some husbands approached coitus abruptly and make a crude departure at the end of the act. It is reported, for example, that the Prophet, peace and blessings be upon him, said, "It is a rude manner of a man to proceed to have intercourse with his wife without first playing with her." Or "It is a vice in a man to assault his unprepared wife, seeking to satisfy his own lust and leaving her before she could achieve her own fulfillment…" Imam al-Ghazali in his Ihya' (vol. 2: 49-50) has mentioned these Ahadith. Most of the scholars of Hadith consider these Ahadith weak (da`if) and we cannot say with surety that they are the statements of the Prophet -peace be upon him, they do, however, contain some wisdom and etiquette that are natural and Islamic.”


People on the net also talk about Islam killing of women who are raped but is it allowed?

The Arabic word ightisab (rape) refers to taking something wrongfully by force. It is now used exclusively to refer to transgression against the honor of women by force.

This is an abhorrent crime that is forbidden in all religions and in the minds of all wise people and those who possess sound human nature. All earthly systems and laws regard this action as abhorrent and impose the strictest penalties on it.

Islam has a clear stance which states that this repugnant action is haram (forbidden) and imposes a deterrent punishment on the one who commits it.

Islam closes the door to the criminal who wants to commit this crime. Western studies have shown that most rapists are already criminals who commit their crimes under the influence of alcohol and drugs, and they take advantage of the fact that their victims are walking alone in isolated places or staying in the house alone. These studies also show that what the criminals watch on the media and the semi-naked styles of dress in which women go out also lead to the commission of this reprehensible crime.

The laws of Islam came to protect women’s honor and modesty. Islam forbids women to wear clothes that are not modest. In addition, Islam encourages young men and women to marry early, and many other rulings that close the door before rape and other crimes. Hence it comes as no surprise when we hear or read that most of these crimes occur in permissive societies, which are looked up to by some Muslims as examples of civilization and refinement! It is worth mentioning here that in America , for example, Amnesty International stated in a 2004 report entitled “Stop Violence Against Women” that every 90 seconds a woman was raped during that year.

In addition, the rapist is subject to the hadd punishment for zina, even if the rape was not carried out at knifepoint or gunpoint. If the use of a weapon was threatened, then he is a muharib, and is to be subjected to the hadd punishment described in the verse in which Allah says (The recompense of those who wage war against Allah and His Messenger and do mischief in the land is only that they shall be killed or crucified or their hands and their feet be cut off from opposite sides, or be exiled from the land. That is their disgrace in this world, and a great torment is theirs in the Hereafter) (Al-Ma’idah 5:33).

So the judge has the choice of the four punishments mentioned in this verse and may choose whichever he thinks is most suitable to attain the objective, which is to spread peace and security in society, and ward off evildoers and aggressors.
Posted by Zafar Khan at 12:04