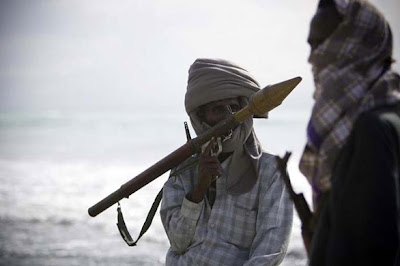 The Pirates consider themselves heroes as opposed to the villains we are made to think of them. Yes they do go and capture the ships, demand ransom and money to let the hostages go. Sometimes they have to fight the navy personnel from different countries and sometimes they lose their lives as well as lives of their hostages. But you decide whether they are heroes or villians

In 1991, the government of Somalia collapsed. Its nine million people have been teetering on starvation ever since – and the ugliest forces in the Western world have seen this as a great opportunity to steal the country's food supply and dump our nuclear waste in their seas.

Yes: nuclear waste. As soon as the government was gone, mysterious European ships started appearing off the coast of Somalia, dumping vast barrels into the ocean. The coastal population began to sicken. At first they suffered strange rashes, nausea and malformed babies. Then, after the 2005 tsunami, hundreds of the dumped and leaking barrels washed up on shore. People began to suffer from radiation sickness, and more than 300 died.

Ahmedou Ould-Abdallah, the UN envoy to Somalia, tells me: "Somebody is dumping nuclear material here. There is also lead, and heavy metals such as cadmium and mercury – you name it." Much of it can be traced back to European hospitals and factories, who seem to be passing it on to the Italian mafia to "dispose" of cheaply. When I asked Mr Ould-Abdallah what European governments were doing about it, he said with a sigh: "Nothing. There has been no clean-up, no compensation, and no prevention."

At the same time, other European ships have been looting Somalia's seas of their greatest resource: seafood. We have destroyed our own fish stocks by overexploitation – and now we have moved on to theirs. More than $300m-worth of tuna, shrimp, and lobster are being stolen every year by illegal trawlers. The local fishermen are now starving. Mohammed Hussein, a fisherman in the town of Marka 100km south of Mogadishu, told Reuters: "If nothing is done, there soon won't be much fish left in our coastal waters."

This is the context in which the "pirates" have emerged. Somalian fishermen took speedboats to try to dissuade the dumpers and trawlers, or at least levy a "tax" on them. They call themselves the Volunteer Coastguard of Somalia – and ordinary Somalis agree. The independent Somalian news site WardheerNews found 70 per cent "strongly supported the piracy as a form of national defence".

No, this doesn't make hostage-taking justifiable, and yes, some are clearly just gangsters – especially those who have held up World Food Programme supplies. But in a telephone interview, one of the pirate leaders, Sugule Ali: "We don't consider ourselves sea bandits. We consider sea bandits [to be] those who illegally fish and dump in our seas." William Scott would understand.

Did we expect starving Somalians to stand passively on their beaches, paddling in our toxic waste, and watch us snatch their fish to eat in restaurants in London and Paris and Rome? We won't act on those crimes – the only sane solution to this problem – but when some of the fishermen responded by disrupting the transit-corridor for 20 per cent of the world's oil supply, we swiftly send in the gunboats.

The epicentre of this piracy is the port town of Eyl, in the Nugal region. It is off limits to the outside world, a safe haven for the pirates and a base for their attacks. It now functions, according to residents, almost completely on the proceeds from piracy.

Much of the rest of Somalia has been destroyed by the seemingly endless wars that have washed across the country in the two decades since it last had a functioning government. The capital, Mogadishu, lies mostly in ruins.

In Eyl, the streets are lined with new buildings and awash with Landcruisers, laptops, satellite phones and global positioning systems.

Almost everyone in Eyl has a relative or husband among the pirates. Fatima Yusuf, who has lived her whole life in Eyl, describes the intense involvement of the whole community in the fortunes of the young men who set out in crews of seven or eight armed with AK-47s and rocket launchers to take on the tankers on the high seas.

The planning is rigorous, Bile insists: "When we want to kidnap a ship, we go with not more than six or seven men because we don't want to be a mob, this is a military tactic."

Fatima says the people will gather to pray for the pirates and that when they set sail sacrifices are made in traditional ceremonies where a goat will be slaughtered, its throat cut."

An industry has grown up around the pirates, with restaurants to feed the kidnapped crews who as potentially tradable assets must be looked after. The pirates have become glamorous figures. Like most of the girls in Eyl, Sadiya Samatar Haji wants to marry a pirate. "I'm not taking no for an answer," she says. "I'll tie the knot with a pirate man because I'll get to live in a good house with good money."

Twelve-year-old Mohamed Bishar Adle, in nearby Garowe, the regional capital of Puntland, knows what he wants to do with his education. "When I finish high school, I will be a pirate man, I will work for my family and will get more money."

Beyond the bravado, Bile acknowledges that the danger is increasing. He will not say how many attacks he has participated in but he does claim to have been one of the pirates who clashed with French forces in April this year after the capture and ransom of a luxury yacht. French commandoes pursued a band of Somali pirates en route to Eyl after a ransom had been paid. Bile says nine of his compatriots were taken and that only he and one other friend were able to escape. Six of those caught face prosecution in Paris after being transferred to France.

He also remembers the terror of his first mission. "You don't know if it's a warship. You have to open fire and if it doesn't respond you know."

Bile did not grow up dreaming of being a pirate. He comes from a family of fishermen whose livelihood was destroyed, he says, by the arrival of industrial trawlers from Europe.

At some 3,300 kilometres, Somalia has the longest coastline in Africa. With a fertile upswelling where the ocean reaches Africa's Horn, the seas are rich in tuna, swordfish and shark, as well as coastal beds of lobster and valuable shrimp.

With the overthrow of Siad Barre's government in 1991, the territorial waters off Somalia became a free-for-all. Trawlers from more than 16 different nations were recorded within its waters – many of them armed. EU vessels flying flags of convenience cut deals with the illegitimate authorities in Somalia, according to UN investigators.

Clashes between large, foreign fishing interests and Somali fishermen in the late 1990s were the prelude to the upsurge in piracy.

Bile, like many of the pirates, calls himself a "coastguard" and insists he has more right to these contested seas than the foreign forces now patrolling them. He says many of his friends' boats were destroyed in these battles and stocks of a fish known locally as "yumbi" have all but disappeared.

Like many in Somalia, Bile is angry that outside powers are seeking a military solution to a more complex problem. He rejects the tag of "terrorist" and denies links to Islamic militias, like the Al-Shabab, which are in control of large areas of Somalia. He insists that the pirates would not give "one AK-47" to the Islamists.

While admitting that the influx of foreign navies is making his life more dangerous, he remains defiant: "We will keep carrying out attacks. We are ready for long distance attacks as far as the coast of Yemen."

The story of the 2009 war on piracy was best summarised by another pirate, who lived and died in the fourth century BC. He was captured and brought to Alexander the Great, who demanded to know "what he meant by keeping possession of the sea." The pirate smiled, and responded: "What you mean by seizing the whole earth; but because I do it with a petty ship, I am called a robber, while you, who do it with a great fleet, are called emperor." Once again, our great imperial fleets sail – but who is the robber?
Posted by Zafar Khan at 11:12