How the killers have escaped their crimes in Iraq 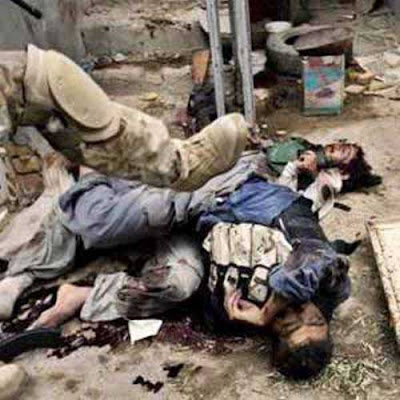 A very good article from the Independent in UK:

I watched a report on Fallujah last week on Sky News by Lisa Holland for which she deserves our gratitude and a top television award. It featured a quietly spoken Iraqi neo-natal specialist, Dr Muntaha Hashim, who is finding that in that town, bombed and collectively punished by the allies, there has been a massive increase in the number of deformed babies. Dr Hashim sees children with two heads – one, a young girl with bountiful hair was curled up on a bed – and others limbless, or born without vital organs. The number has doubled since the days of Saddam.

Some unidentified chemical weaponry is responsible. Pro-war politicians, dodgy spooks, spin doctors and unrepentant media warriors such as Christopher Hitchens still claim triumphantly the war was a victory of good over evil. Their own offspring will not be born with two heads and, they must believe, Iraqis are paying but a small price for 'freedom'.

We will never know what was done in Fallujah in our name. We will not be told the full truth on the victimisation of civilians in Basra either, nor on the global "renditions" industry, which provides us with information obtained under torture from alleged terrorists, and certainly not on our productive links with some of the world's most diabolical regimes.

In our supposedly free and open democracy we are not even entitled to know the truth about why we went to war in Iraq – a war which made terrorism respectable and convinced millions of Muslims that the West had embarked on a new crusade.

As a good citizen, I make it my business to question MPs and peers who supported the false case made for the Iraq war. I meet with practiced insouciance or unwarranted fury, or that most base of excuses: "I believed what I was told". Contrition hardly makes an appearance. Most do not want to be dragged back to those difficult days. Even Chris Mullin, whose published diaries are delightful, was against the war but succumbed to Blair's charm offensive and voted to prevent an inquiry – a stand I find inexplicable and unforgivable.

The issue of Iraq is the cut on the body politic that seeps and will not heal, as a constant reminder of the wounded country our soldiers leave behind. In a recent BBC poll over 70 per cent of Britons want an open and credible inquiry on it. Millions more want another on the use of torture allegedly sanctioned by the Government.

The attorney general has, to her credit, decided the latter needs to be investigated through the criminal justice system, and we are now given a vague promise of some kind of investigation on Iraq, probably deep indoors, some years hence. David Miliband has said: "I am obsessed with the next five years in Iraq, not the last five". We seem to have institutionalised duplicity in the executive, judiciary, intelligence services, Parliament and the Privy Council (the 'privy' is, of course, a water closet where nasty stuff is dumped and washed out). And those in power will, after feigned concern, simply flush the burning issues away.

You cannot trust our masters not to cover their tracks and it is now impossible to trust those they choose to lead investigations into improper conduct. Remember Hutton. Remember Butler.

It is a very British response, that is so clearly illustrated by the interminable Saville Inquiry into Bloody Sunday. In 1972 Lord Widgery decided the army did no wrong. Another inquiry was set up 10 years ago under Lord Saville. It still has to deliver a judgement. By the time it does – after spending millions of pounds – few will care.

Meanwhile, all the key players who lied grievously and sexed-up evidence have got away with it. More sickening still, the once conjoined twins Tony Blair and Alastair Campbell are today endowed with respect. Blair struts around the world stage believing himself to be a Mandela figure, a peace prophet. Campbell gets plaudits for his panache, a novel, his wit, intelligence and cockiness.

Carne Ross, a former Foreign Office advisor on Iraq, says we were duped. Brian Jones, former head of arms intelligence at the MOD believes the "dossier" was manipulated by Downing Street. According to Lord Bingham, Britain broke international law. Nick Clegg wants a full public inquiry, so too the families of soldiers killed in action. And Iraqis want to know who is responsible for the cries of grieving mothers as they deliver malformed foetuses. They will all wait in vain, I fear. There is no atonement, only glory for the sinners. Perhaps God really is on their side.