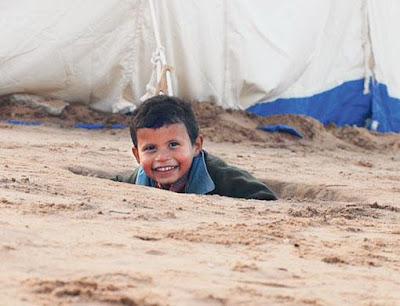 As of February 5, 431 Palestinian children have died and 1,872 wounded in the 22-day Israeli attack that ended on January 18, according to the Gaza Health Ministry.

The impact of a conflict on children is high and often it is they who are hurt most in the wars fought by adults.

The population of Gaza is about 1.5 million of which 56 per cent - approximately 793,520 - are children, according to the Palestinian Central Bureau of Statistics. Humanitarian access to all, especially to the most vulnerable, must be unhampered.

On January 10, four children playing football were hit by an Israeli missile, which disfigured their bodies so completely their own families could not identify the bodies.

"We have the right to play in a safe place and to enjoy life," 15-year-old Emad told Gulf News. Emad plays football along with his friends in the neighbourhood daily. "We didn't have the chance to play during the war because it was too dangerous at that time. So we play now and don't know whether we'll be able to play safely every day."

Emad, his siblings, and all of Gaza's children are finding their lives diminished each day - a cruel, slow suffocation of their spirit and dreams. Instead of expanding their future horizons, they are trapped in a virtual prison, where things that every child should be able to take for granted are instead being taken away - the right to play, to go to school, to have enough to eat, to have light to study by at night, and to feel safe in their own homes.

The children's lives are limping back to normal. They play football and other games trying to forget the tragedies of the war.

The health and nutrition standards for Gaza's children since the recent war have declined to abysmal levels.

Unicef remains concerned that the nutritional status and general health of children in Gaza are likely to deteriorate given the dependency of Gaza families on food aid and cash assistance, as well as the lack of access to clean tap water.

From mid-January, Unicef has provided essential supplements of vitamin A and D, and iron-foliate, to 50,000 infants and children under five through the Health Ministry centres and UNRWA [UN agency for Palestinian refugees] clinics.

People in Gaza have been spending a long time in queues for gas, fuel and food aid since the attack. Right now many families are living in tents or with relatives. A lack of adequate housing leads to a lack of clean water.

By the end of February, an UNRWA assessment indicated that 2,350 families need to have their homes reconstructed; 10,500 families have homes needing repairs, and these figures are likely to rise.

This correspondent visited Al Nasser Children's Hospital in Gaza City [one of two paediatric hospitals in Gaza], where Unicef is providing training and supplies, including incubators, monitoring equipment, and essential drugs.

The hospital lacks equipment and is in dire need of medical supplies, mostly due to the 18-month-old blockade. The neonatal unit lacks spare parts that are needed to repair equipment.

Education standards have also declined drastically since the war.

Palestinians were once reputed to be among the best-educated people in the Middle East. But after years of violence, isolation, and poverty, their tradition in educational excellence has been shattered.

Unicef Executive Director Ann M. Veneman recently paid a visit to Israel and the occupied Palestinian territory to assess the humanitarian crisis in Gaza, with special focus on children. "I visited Jabaliya Co-educational School in north Gaza, under the Palestinian Authority [PA], where Unicef is providing educational and recreational supplies. It was surprising how many schools were hit - directly and indirectly, including UNRWA and PA schools and even the American International School was destroyed," she told Gulf News.

"Classrooms were devastated by the attacks and Unicef has provided tents to facilitate continued learning. Education is very important to children for creating a sense of normalcy and routine," she added.

Due to severe damage to six PA schools in northern Gaza, 4,711 students were relocated to seven other PA schools, leading to overcrowding and double shifts.

Prior to the hostilities, 151 schools out of 351 were working in double shifts due to restrictions on bringing construction materials. Concrete, cement and steel have not been allowed into Gaza since November 5.

Gaza The psychological impact of the war and the blockade varies among the children themselves - but clearly it has had an impact, according to Unicef Executive Director Ann M. Veneman.

A two-year international investigation has revealed an increase in the number of stunted children in the occupied Palestinian territories and conditions so extreme that Palestinian women have on occasion been forced to give birth at Israeli military checkpoints.

A series of articles published today by the Lancet concludes that the occupation, the recent conflict in Gaza and inter-Palestinian fighting are undermining the health and development of the population. The best solution to health in the territories is peace and security under a sovereign Palestinian state, argue the authors, who are doctors and academics from Birzeit University in Ramallah and Oxford, with assistance from international health scientists, the World Health Organisation and other UN agencies.

Since 2000, Rita Giacaman from Birzeit University and colleagues say, "life for Palestinians has become much harder, more dangerous and less secure". There is evidence that health gains during the 1990s are being eroded.

A humanitarian crisis had emerged in the Gaza Strip, "intensifying as a result of the Israeli military invasion in December 2008 and January 2009, and because of destruction of homes and infrastructure, the death and injury of civilians and shortages of food, fuel, medicines and other essentials", they say.

The rate of stunting - the failure of children under five to grow as they should - has gone up. In 1996, 7.2% of young children had stunted growth, but in 2006, the proportion had risen to 10.2%. "Stunting during childhood is an indicator of chronic malnutrition, and is associated with increased disease burden and death," the authors write. It can also result in damage to a child's mental development and link to obesity and chronic diseases in adulthood. Between 1999 and 2003 rates of tuberculosis have risen by 58% and meningococcal meningitis by 53%.

The second article in the series, by Hanan Rahim from Birzeit University, with colleagues from Qatar, Glasgow and Yale universities, finds that the restrictions on movement in the occupied territories have made it harder for women in labour to get to a maternity unit. "Between 2000 and 2006, the ministry of health reported 69 cases of Palestinian women giving birth at Israeli checkpoints," they write. Ten per cent of women in labour were delayed for two to four hours on the road to the maternity facility, whereas the average time without roadblocks was 15-30 minutes.

Thousands of children in Israel do not qualify for healthcare, as a result of their or their parents' status in Israel, Physicians for Human Rights (PHR) announced Thursday, in a petition to Israel's High Court of Justice requesting that such children be granted health insurance.

According to the petition, children of refugees seeking safe haven in Israel, children who have one Palestinian parent or children whose parents cannot afford basic insurance arrangements are not having their basic medical needs met under the existing mechanism.

Since 2001, the state set up a special arrangement to allow foreign workers to purchase a basic health care package for their children through the 'Meuchedet' HMO. The package, which includes all the same benefits as the basic state-issued package, costs NIS 185 (approximately $45) a month for one child or NIS 370 (approximately $90) for two or more children.

Nonetheless, there are several problems with this arrangement that leave many children without health coverage. For example, the child must have lived in Israel for at least half a year to qualify for coverage, even if the child in question is a newborn baby.

Additionally, the arrangement does not cover medical problems that existed prior to purchasing the health insurance. Likewise, falling behind on payments brings an end to the insurance. Finally, children with a Palestinian parent do not qualify for the insurance.

Does this remind anyone of apartheid?
Posted by Zafar Khan at 14:33