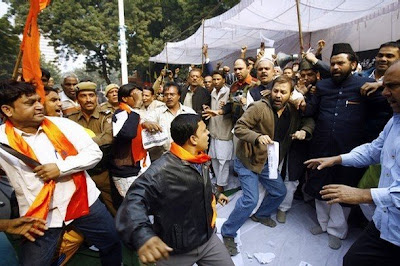 The sunny apartment had everything Palvisha Aslam, 22, a Bollywood producer, wanted: a spacious bedroom and a kitchen that overlooked a garden in a middle-class neighborhood that was a short commute to Film City, where many of India's Hindi movies are shot.

She was about to sign the lease when the real estate broker noticed her surname. He didn't realize that she was Muslim, he said. Then he rejected her. It was just six weeks after the November Mumbai terrorist attacks and Indian Muslims were being viewed with suspicion across the country. He then showed her a grimy one-room tenement in a Muslim-dominated ghetto. She felt sick to her stomach as she watched the residents fight over water at a leaky tap in a dark alley.

"That night I cried a lot. I was still an outcast in my own country -- even as a secular Muslim with a well-paid job in Bollywood," said Aslam, who had similar experiences with five other brokers and three months later is still sleeping on friends' sofas. "I'm an Indian. I love my country. Is it a crime now to be a Muslim in Mumbai?"

In the months after the brazen three-day Mumbai terrorist attacks, stories like Aslam's are common, even among some of the country's most beloved Bollywood actors, screenwriters and producers in India's most cosmopolitan city. The accusations of discrimination highlight the often simmering religious tensions in the world's biggest democracy, where Muslim celebrities can be feted on the red carpet one minute and locked out of quality housing the next.

The phenomenon has become known here as "renting while Muslim." It raises questions that go to the heart of India's identity as a secular democracy that is home to nearly every major religion on the planet. Although India has a Hindu majority, it also has 150 million Muslims, one of the largest Muslim communities in the world.

"The new generation wants a better India that isn't bogged down in religious strife," said Junaid Memon, 34, a Muslim Bollywood director who is trying to promote religious harmony through his films and his Facebook site. "We shouldn't be an India that ghettoizes all Muslims to apartments near a mosque. This is a real test for modern India."

Many Muslims here feared the attacks would unleash cycles of revenge killing of the sort that have recurred throughout India's modern history, from the violence of partition between India and Pakistan in 1947 to the 1992 riots in Mumbai. In the days after November's Mumbai attacks, Muslims from all corners of society united, holding candlelight vigils with a message to protest terrorism and pledge loyalty to India. In the end, there was no communal violence.

But across the country, reports of housing discrimination have increased.

Afroz Alam Sahil, 21, a student activist at Jamia Millia Islamia College in New Delhi, said that more than a dozen students from states such as Uttar Pradesh and Bihar -- which have large Muslim populations -- have been unable to find housing since the Mumbai attacks.

"Some Muslim friends have dropped out of college because they have nowhere to stay," Sahil said. "There is intense suspicion. Sometimes I ask myself why I was born Muslim."

Rana Afroz, a Muslim editor with the newspaper the Hindu, is investigating the issue after spending three months unable to find a landlord willing to rent to her and her husband.

"It is ridiculous that I have to prove to non-Muslims that I am not making bombs in my kitchen," she said. "Is this really the modern India I live in?"

In India, Muslims are often segregated, and they experience high poverty rates and low literacy. Although they make up nearly 14 percent of India's population, they hold fewer than 5 percent of government posts and are just 4 percent of the student body in India's elite universities, according to a 2006 government report.

Muslims, who have seen housing discrimination and the number of vegetarian buildings spike after every terrorist attack, see the issue as blatant discrimination.

"Everyone knows the vegetarian-only restriction is code language for 'No Muslims,' " said Naved Khan, a Muslim real estate broker who is trying to help Bollywood's Muslims find housing.

On a recent afternoon, Aslam, the producer, hung out at a cafe, as she sometimes does so she doesn't get on the nerves of those she is staying with. She wore jeans and a hooded sweat shirt.

Until January, she was living with a Hindu roommate. Then their lease ended. Her roommate was getting married.

"So I thought I would get my own place as a successful adult," said Aslam, who had come to Mumbai from Kolkata with dreams of landing a Bollywood job. "My mom was really proud of me. Now she's really upset."

A broker recently showed her a house in a working-class neighborhood. "It looked haunted. But I was denied even that," she said.

Another broker gave her advice: "Madam, live with a Hindu roommate. Only then will you get a flat."


Back in August last year, film star Saif Ali Khan thought of buying a new house, he made a conscious decision that he would not approach a Hindu housing society for fear of being rejected. That's a superstar of the country talking.

Our sources in the construction industry say that Saif did approach a few Hindu housing societies and was rejected –- despite being a superstar. Saif, however, says that he went straight to a Muslim builder to buy his dream house. "I know there are localities and building societies that won't sell real estate to anyone who's a Muslim. I went to a Muslim builder to avoid complications."

Saif insists that the problem of communal segregation is very real. "And it's not restricted to building societies in Mumbai, it's there in society in general. It's common knowledge that in certain areas of Juhu and Bandra land and houses are not sold to Muslims. I'm constantly surprised by how much religion matters to some people here. Perceptions of religion are always based on experience or fanaticism. Some elements have spoilt things for the entire community. That's the sad truth about Islam,” says the star who has bought a 4-BHK apartment in La Beau in Bandra.

Reacting to the extremist diktat that none of the Khans must act in Hindi films, Saif says, "I'd rather get shot than not do a shot! I'd have a tough time finding another job. There's nothing I can do apart from acting."

Muslim stars have always had problems while buying houses in certain areas between Andheri and Bandra. Emraan Hashmi, Arbaaz Ali Khan, Zeenat Aman, Sophie Chowdhury and Aamir Ali have been through this grind too.

Sophie Chowdhury house-hunted for over two years.There were times that she almost finalised the deal, but when she revealed her identity, the deal was cancelled.

Arbaaz Ali Khan was refused a house on Perry Cross Road in Bandra. Similarly, Zeenat Aman had to look for a flat for over three months before she could buy a house in Juhu. Ditto Emraan Hashmi. Aamir Ali's hunt for a house took over a year. He even filed a court case over this issue.
Posted by Zafar Khan at 12:04