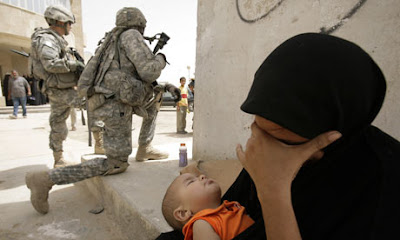 Corruption, weak law enforcement and porous borders are compounding a growing child trafficking crisis in Iraq, according to officials and aid agencies, with scores of children abducted each year and sold internally or abroad.

Criminal gangs are profiting from the cheap cost of buying infants and the bureaucratic muddle that makes it relatively easy to move them overseas. Accurate figures are difficult to obtain because there is no centralised counting procedure, but aid agencies and police say they believe numbers have increased by a third since 2005 to at least 150 children a year.

One senior police officer said at least 15 Iraqi children were sold every month, some overseas, some internally, some for adoption, some for sexual abuse. Officials believe at least 12 gangs are operating in Iraq, offering between £200 and £4,000 per child, depending on its background and health. The main countries in which they are sold are Jordan, Turkey, Syria and some European countries including Switzerland, Ireland, the UK, Portugal and Sweden.

According to Colonel Firaz Abdallah, part of the investigation department of the Iraqi police, gangs use intermediaries who pretend to be working for non-governmental organisations. During negotiations with the families, members of the trafficking gangs prepare the paperwork: birth certificates, change of names and the addition of the child to the passport of the intermediary or any other person who is paid to take the child outside, usually to Syria and Jordan and from there, to Europe or other Middle East countries.