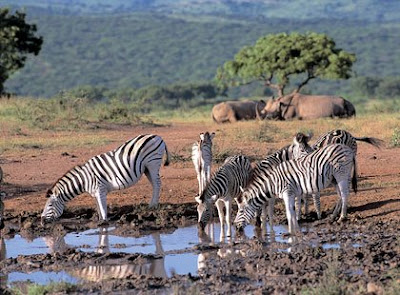 AS jubilant African National Congress (ANC) supporters danced in the streets after their success in last Wednesday’s general election, South Africa’s battered opposition parties pondered their future with a degree of misgiving.

The ANC’s victory was never in doubt, but most pundits expected widespread voter disgruntlement to result in a sharply reduced majority.

Many of South Africa's Muslim voters head to the polling stations on Wednesday, April 22, determined to vote for the ruling African National Congress Party (ANC), saying it has long worked to secure their rights and freedoms.

"I will vote for the party that fought for this country’s liberation," Zahid Asmal, head of news, research and development at Channel Islam International radio, told IslamOnline.net.

Asmal says the ANC, which has been ruling post-apartheid South Africa for the past 15 years, is a favorite for Muslims and non-Muslims alike.

"Millions of people have benefited from [its] reconstruction and development program."

He believes that his favored ANC will win an overwhelming majority.

"The ANC is the only party with a relevant manifesto

Ebrahim Moosa, a Muslim, is still undecided on which party to pick.

"I’m caught in a dilemma of choosing between smaller parties who boast some wonderful credentials on paper but who have little chance of wining and the ruling party," the independent political analyst, told IOL.

Nonetheless, Moosa recognizes that the ANC is credited for reaching out Muslims, who make up some 1.5 percent of South Africa's 49 million population.

He says the ANC was keen to address Muslims’ concerns regarding foreign affairs issues, such as the Middle East conflict.

"The ANC has been leaning favorably towards justice for the Palestinians while the opposition has been known to support the Israeli occupation of Palestine."

Azar Vadi, who lives in the predominately-Muslim suburb of Lenasia south of
Johannesburg, agrees that the ANC has been aligning with Muslims and addressing major issues affecting them.

"Yes, I believe the ANC is in the best position to address the needs of the Muslim community," he told IOL.

"They have enshrined freedom of religion and allow religious practices that are sometimes even lacking in Muslim countries."

Asmal, of Channel Islam International radio, contends that the fundamental rights of Muslim citizens did not come under any threat under the ANC.

Prominent Muslims were notably represented in all forms of government over the past years.

In addition to two cabinet ministers, there are a number of Muslim MPs and councilors in the various provinces.

"The ruling ANC has proved that it protects the minority rights," says Asmal.

"It is the only party that can protect the interests of Muslims."
Posted by Zafar Khan at 12:23