British Police convinced that 'most Pakis are Terrorists' 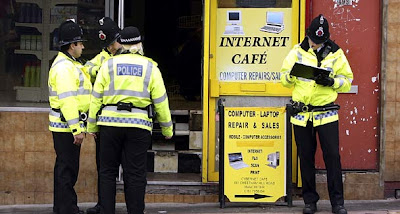 Lol. British police arrested 12 men on suspicion of plotting a large al-Qaida atrocity but have now released them without charge. Not wanting to lose their face, they are now going to deport them back to Pakistan.

This is to be investigated by Lord Carlile, the country's terror watchdog. Carlile, the independent reviewer of terrorism legislation, said he would carry out a review into the raids, that took place in the north-west of England on the Wednesday before Easter, after all 12 suspects were released without charge.

"I do not believe a mistake was made," said Peter Fahy. "We were faced with a very difficult decision."

The last two suspects were released into the custody of the UK Border Agency by the police yesterday, 24 hours after nine others had been transferred to the border agency for deportation without being charged.

A 12th suspect was released earlier in the operation. Eleven of the men are Pakistani nationals who entered the country on student visas. They now face deportation on the grounds of national security. The 12th is a British national.


A top Pakistani diplomat in London has said that Gordon Brown's statements after the arrests a fortnight ago were shocking and had helped extremists.

In an interview with the Guardian, Asif Durrani, Pakistan's deputy high commissioner to London, said Britain appeared vindictive against Pakistani nationals and said claims that Islamabad was soft on terror were slurs.

Brown's statements were taken by Pakistan as a public accusation that it was not doing enough to help the UK's fight against terrorism. Ten of those accused were Pakistani nationals who entered Britain on student visas, one is believed to be Afghani, and another is a British national granted sanctuary here after claiming persecution by the Taliban.

Durrani, a diplomat for 23 years with previous postings in Kabul and the United Nations, said: "Pointing a finger towards Pakistan was shocking for us ... it was uncalled for and shocking."


Sarfraz Manzoor has an article in the Guardian about 'How to tell I'm not a terrorist'.

It used to be simple to spot the fundamentalist: they would have tell-tale signs such as metal hooks and carry a charred copy of The Satanic Verses or a "Death to Israel" placard. It isn't so easy now. What does a moderate Muslim look like? How to tell if a bearded neighbour is a pious believer or plotting to blow up the local shopping centre? How to distinguish between the student who is taking photographs to send to relatives and the jihadist on reconnaissance?

If only these were theoretical dilemmas. Last week I was detained at JFK airport in New York. At the end of a lengthy grilling the officer turned to his colleague and said: "We have a 37-year-old male who has been to Pakistan in the past three years – shall I deport him?" The fact that the Pakistan trip was for a Radio 4 documentary, or that I had written a book which devoted a chapter to my fascination with the US was irrelevant. I was Pakistan-born and had a funny name so I was suspicious. It isn't that I don't understand the concern, or that some of it isn't legitimate; I wish I knew what I should say next time to prove I don't want to blow anyone up, and just want to spend a few days visiting galleries.

British Muslims are constantly called upon to denounce the extremists, to distance themselves from their ideas and actions. This leaves them forever on the defensive, having to react to the actions of the militant minority. So perhaps it's time to get proactive. That in itself is controversial: the standard response from British Muslims is to say that they shouldn't have to apologise for the actions of the extremists, that those Islamists are as Muslim as the KKK are Christian. But that theory doesn't help much in practice.

So here are a few suggestions for how to help the police, airport immigration and anyone else who finds it hard to differentiate between liberal and extremist Muslims. All Muslims who consider themselves liberal and tolerant could apply for a special card which when presented would show the holder was a "pre-approved Muslim", thus saving time at airports. Sure, some may say that such a card would represent a gross violation of human rights but I think it could be marketed like a credit card: membership has its privileges – in this case not being indiscriminately arrested or held up when travelling. Those who feel uncomfortable carrying a card could be offered an alternative – a white girlfriend perhaps, someone to vouch for the fact that they have successfully ­integrated into society and have no immediate plans for a holy war.

Perhaps I could carry a sandwichboard with the slogan "I love John Stuart Mill". That may prove too subtle, maybe something more permanent is needed to convince the sceptics. How about all moderate Muslims having "Don't panic – I'm Islamic" inked on their forearms by a government-approved tattoo artist. That way, the next time extremists march in Luton against returning British soldiers, the moderate Muslims would only have to walk around in a T-shirt and everyone could breathe easy ­knowing they were not the bad guys.

There is one other possibility: that Muslims are presumed innocent, unless there is evidence to the contrary.
Posted by Zafar Khan at 12:31