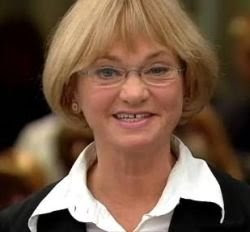 Islamophobe leader of far-right Danish People's Party Pia Kjaersgaard
Pia Kjaersgaard, the well-known Islamophobe and the founder and leader of the far-right Danish People's Party (DPP), which tragically has the controlling power in the current parliament, said recently that, should she ever have to go into hospital, she would refuse to be treated by a nurse wearing the headscarf or the face veil.

Has the DPP got similar problems with the headscarf worn by Denmark's low and dwindling number of nuns? If it has, it is staying absolutely silent on the issue when to be fair and honest it should speak out. And if has not, well, that would just be one more confirmation that the DPP's problem is not with the headscarf but with Islam, as it has openly stated on many occasions.

For the record, the Catholic Church has around 1.1 billion members world-wide and despite the rising number of memberships, the total number of nuns and monks is reducing, dropping by 10 percent in the year 2005/2006 and currently just under one million worldwide.

On the Danish level, at the latest official count the total number was 194 nuns, the vast majority are over 50 years old, living in 20 different monasteries and there are almost no monks.

For instance, in the Order of the Sisters of St. Joseph, a Roman Catholic order of women founded in Le Puy, France, the number has gone from 500 nuns 25 years ago to just 30 today.

As an aside, did you know that according to central Catholic dogma only Catholics are Christians? Meaning of course that, from a Catholic viewpoint, all other "Christian" denominations are, strictly speaking, not Christians at all but to be considered along with Jews, Muslims, Buddhists, Hindus, etc, as people in error! Oh yes!

Very early on, in the 4th century if I remember right, and confirmed several times since, the Catholic church laid down that, "Extra Ecclesiam Nulla Salus", (English for: outside the church there is no salvation), and the church of course meaning the Catholic one.

After all, the word catholic simply means universal or general.

So there! That of course does not stop the recent Pope standing on the lawns of the White House with that well-known war criminal and mass-murderer, the born-again non-Catholic "Christian" x-president GWB, saying "God bless America"... It is a strange world indeed!
Posted by Zafar Khan at 04:33