Wardina Safiyyah is a TV host, actress and model. 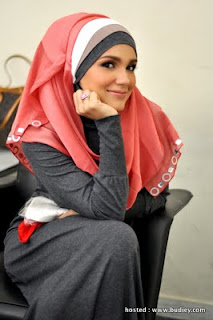 She used to sashay down the runways across Asia in short skirts and revealing tops.

Then 15 years ago she decided to 'cover up' and expose only her wrists and face as a way to profess her Islamic faith. She, like many Muslim women in Malaysia, began to wear the headscarf or 'tudong' as it is called it in Malay.

The headscarf is the most visible sign of the islamisation of Malaysia, which has been gathering pace since the Iranian revolution of 1979. While some non-Muslims are concerned about this trend, Ms Wardina says her ability to choose what she wants to wear is proof that Malaysia is still a moderate Islamic nation.

Today, Ms Wardina has become a fashion icon for Muslim women in the country and she hopes to redefine the concept of beauty.

Ms Wardina feels empowered by her new Islamic attire - forcing people to judge her on her talent rather than her cleavage, she says.