How Israel takes its revenge on boys who throw stones 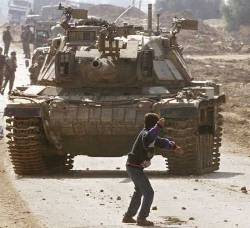 The boy, small and frail, is struggling to stay awake. His head lolls to the side, at one point slumping on to his chest. "Lift up your head! Lift it up!" shouts one of his interrogators, slapping him. But the boy by now is past caring, for he has been awake for at least 12 hours since he was separated at gunpoint from his parents at two that morning. "I wish you'd let me go," the boy whimpers, "just so I can get some sleep."

During the nearly six-hour video, 14-year-old Palestinian Islam Tamimi, exhausted and scared, is steadily broken to the point where he starts to incriminate men from his village and weave fantastic tales that he believes his tormentors want to hear.

This rarely seen footage seen by The Independent offers a glimpse into an Israeli interrogation, almost a rite of passage that hundreds of Palestinian children accused of throwing stones undergo every year.

Israel has robustly defended its record, arguing that the treatment of minors has vastly improved with the creation of a military juvenile court two years ago. But the children who have faced the rough justice of the occupation tell a very different story.

"The problems start long before the child is brought to court, it starts with their arrest," says Naomi Lalo, an activist with No Legal Frontiers, an Israeli group that monitors the military courts. It is during their interrogation where their "fate is doomed", she says.

Sameer Shilu, 12, was asleep when the soldiers smashed in the front door of his house one night. He and his older brother emerged bleary-eyed from their bedroom to find six masked soldiers in their living room.

Checking the boy's name on his father's identity card, the officer looked "shocked" when he saw he had to arrest a boy, says Sameer's father, Saher. "I said, 'He's too young; why do you want him?' 'I don't know,' he said". Blindfolded, and his hands tied painfully behind his back with plastic cords, Sameer was bundled into a Jeep, his father calling out to him not to be afraid. "We cried, all of us," his father says. "I know my sons; they don't throw stones."

In the hours before his interrogation, Sameer was kept blindfolded and handcuffed, and prevented from sleeping. Eventually taken for interrogation without a lawyer or parent present, a man accused him of being in a demonstration, and showed him footage of a boy throwing stones, claiming it was him.

"He said, 'This is you', and I said it wasn't me. Then he asked me, 'Who are they?' And I said that I didn't know," Sameer says. "At one point, the man started shouting at me, and grabbed me by the collar, and said, 'I'll throw you out of the window and beat you with a stick if you don't confess'."

Sameer, who protested his innocence, was fortunate; he was released a few hours later. But most children are frightened into signing a confession, cowed by threats of physical violence, or threats against their families, such as the withdrawal of work permits.

When a confession is signed, lawyers usually advise children to accept a plea bargain and serve a fixed jail sentence even if not guilty. Pleading innocent is to invite lengthy court proceedings, during which the child is almost always remanded in prison. Acquittals are rare. "In a military court, you have to know that you're not looking for justice," says Gabi Lasky, an Israeli lawyer who has represented many children.

There are many Palestinian children in the West Bank villages in the shadow of Israel's separation wall and Jewish settlements on Palestinian lands. Where largely non-violent protests have sprung up as a form of resistance, there are children who throw stones, and raids by Israel are common. But lawyers and human rights groups have decried Israel's arrest policy of targeting children in villages that resist the occupation.

In most cases, children as young as 12 are hauled from their beds at night, handcuffed and blindfolded, deprived of sleep and food, subjected to lengthy interrogations, then forced to sign a confession in Hebrew, a language few of them read.

Israeli rights group B'Tselem concluded that, "the rights of minors are severely violated, that the law almost completely fails to protect their rights, and that the few rights granted by the law are not implemented".

Israel claims to treat Palestinian minors in the spirit of its own law for juveniles but, in practice, it is rarely the case. For instance, children should not be arrested at night, lawyers and parents should be present during interrogations, and the children must be read their rights. But these are treated as guidelines, rather than a legal requirement, and are frequently flouted. And Israel regards Israeli youngsters as children until 18, while Palestinians are viewed as adults from 16.

Lawyers and activists say more than 200 Palestinian children are in Israeli jails. "You want to arrest these kids, you want to try them," Ms Lalo says. "Fine, but do it according to Israeli law. Give them their rights."

In the case of Islam, the boy in the video, his lawyer, Ms Lasky, believes the video provides the first hard proof of serious irregularities in interrogation.

In particular, the interrogator failed to inform Islam of his right to remain silent, even as his lawyer begged to no avail to see him. Instead, the interrogator urged Islam to tell him and his colleagues everything, hinting that if he did so, he would be released. One interrogator suggestively smacked a balled fist into the palm of his hand.

By the end of the interrogation Islam, breaking down in sobs, has succumbed to his interrogators, appearing to give them what they want to hear. Shown a page of photographs, his hand moves dully over it, identifying men from his village, all of whom will be arrested for protesting.

Ms Lasky hopes this footage will change the way children are treated in the occupied territories, in particular, getting them to incriminate others, which lawyers claim is the primary aim of interrogations. The video helped gain Islam's release from jail into house arrest, and may even lead to a full acquittal of charges of throwing stones. But right now, a hunched and silent Islam doesn't feel lucky. Yards from his house in Nabi Saleh is the home of his cousin, whose husband is in jail awaiting trial along with a dozen others on the strength of Islam's confession.

The cousin is magnanimous. "He is a victim, he is just a child," says Nariman Tamimi, 35, whose husband, Bassem, 45, is in jail. "We shouldn't blame him for what happened. He was under enormous pressure."

Israel's policy has been successful in one sense, sowing fear among children and deterring them from future demonstrations. But the children are left traumatised, prone to nightmares and bed-wetting. Most have to miss a year of school, or even drop out.

Israel's critics say its policy is creating a generation of new activists with hearts filled with hatred against Israel. Others say it is staining the country's character. "Israel has no business arresting these children, trying them, oppressing them," Ms Lalo says, her eyes glistening. "They're not our children. My country is doing so many wrongs and justifying them. We should be an example, but we have become an oppressive state."

7,000 [Figure corrected due to subbing error, with apologies for earlier error.] The estimated number of Palestinian children detained and prosecuted in Israeli military courts since 2000, shows a report by Defence for Children International Palestine (DCIP).

87 The percentage of children subjected to some form of physical violence while in custody. About 91 per cent are also believed to be blindfolded at some point during their detention.

12 The minimum age of criminal responsibility, as stipulated in the Military Order 1651.

62 The percentage of children arrested between 12am and 5am.