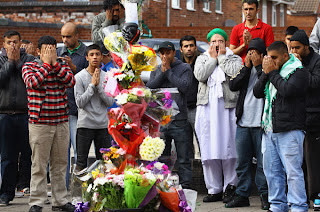 There is a lively debate taking place in the UK media between left and right wing commentators as to the causes of the English riots, in which hundreds of shops and businesses have been looted. However, both sides agree that the looting has been inexcusable. I hope both sides will also agree with me that Muslims have played an important role in helping to tackle the looting and preserve public safety. This would be an especially important acknowledgment if it came from those Islamophobic commentators who consistently denigrate Muslims.

"When accused of terrorism we are Muslims, when killed by looters, we become Asian", a Muslim student explained to me. He was commenting on the media reportingof the death of three young Muslims in Birmingham on Tuesday night. Like many other Muslims, they were bravely defending shops and communities as rioters went on a violent rampage of looting.

In recent days Muslim Londoners, Muslims from Birmingham, and Muslims in towns and cities around England have been at the forefront of protecting small businesses and vulnerable communities from looting. Having worked closely with Muslim Londoners, first as a police officer and more recently as a researcher, for the last ten years this commendable bravery comes as no surprise to me. But their example of outstanding civic duty in support of neighbours is worth highlighting - especially when sections of the UK media are so quick to print negative headlines about Muslims on the flimsiest of pretexts.

On Monday evening when London suffered its worst looting in living memory I watched as a well marshaled team of volunteers wearing green fluorescent security vests marked 'East London Mosque' took to the streets of Tower Hamlets to help protect shops and communities from gangs of looters. This was the most visible manifestation of their pro-active response to fast moving and well co-ordinated teams of looters. Less visible was the superb work of Muslim youth workers from Islamic Forum Europewho used the same communication tools as the looters to outwit and pre-empt them on the streets.

While senior Westminster politicians started to pack and rush back to London from foreign holidays I watched Lutfur Rahman, the Muslim mayor of Tower Hamlets, offering calm leadership and support in the street as gangs of looters were intercepted and prevented from stealing goods in his presence.

Most important to emphasise is the extent to which everyone in Tower Hamlets was a beneficiary of streetwise, smart Muslims acting swiftly to protect shops, businesses and communities against looters. It is often wrongly alleged that Muslims lack any sense of civic duty towards non-Muslims and especially towards the LGBTcommunity. I wish peddlers of that negative anti-Muslim message had been present to see how all citizens in Tower Hamlets were beneficiaries of Muslim civic spirit and bravery on Monday night.

I am not sure if the Telegraph's Andrew Gilligan was robbed of his bike by looters in Tower Hamlets or in another part of London as he cycled home from Hackney to Greenwich on Monday night, but even his incessant negative reporting of Muslims associated with the East London Mosque would not have excluded him from their neighbourly support had they been in the immediate vicinity to help him.

Gilligan reports that police were unable to offer him any advice other than to go home when he finally received an answer to his 999 call as a victim of a violent street robbery. London policing on Monday night was stretched as never before and Gilligan was one amongst hundreds of victims who had to fend for themselves as looters ran amok around the capital city. In these unique circumstances the street skills of Muslim youth workers, who are routinely helping police to tackle violent gang crime and anti-social behaviour in Tower Hamlets, Walthamstow, Brixton and in other deprived neighbourhoods, were a key ingredient in filling the vacuum created by insufficient police numbers.

I first saw East London Mosque and Islamic Forum Europe street skills in action in 2005 when they robustly dispatched extremists from Al Muhajiroun who were in Whitechapel attempting to recruit youngsters into their hate filled group. I saw the same skills in action in the same year when volunteers from the Muslim Association of Britain and Muslim Welfare House ousted violent supporters of Abu Hamza from the Finsbury Park Mosque. More recently, Muslim bravery has been seen in Brixton when extremists spouting the latest manifestation of Al Muhajroun hatred were sent packing out of town. In all these instances, and so many more, the brave Muslims involved have received no praise for their outstanding bravery and good citizenship, and instead faced a never ending barrage of denigration from journalists such as Gilligan, Melanie Phillips, Martin Bright.... sorry I won't go on, it's a long list!

Sadly, many of the brave Muslims helping to keep their cities safe have not only grown used to denigration from media pundits but also faced cuts in government funding for their youth outreach work with violent gangs. This is not as a result of widespread economic cuts caused by the recession, but because the government adopts the media view that they are 'extremist'. Street in Brixton is a case in point. Yesterday Dr Abdul Haqq Baker director of Street was forced to close a Street youth centre in Brixton as his reduced team of youth of workers struggled to keep pace with the task of tackling gang violence and its role in rioting and looting.

Significantly, the same potent mixture of Muslim street skills and bravery was evident last summer when the Islamophobic English Defence League (EDL) began to prepare for a violent demonstration in Whitechapel. On that occasion police commended the skills of Muslim youth workers who helped reduce tension and manage anger towards the EDL.

Two weeks ago, under the banner United East End neighbours of all faiths and none gathered at the London Muslim Centre in Whitechapel to express solidarity with their Muslim neighbours who are the target of another provocative English Defence League demonstration planned for 3 September. It is no co-incidence that Anders Breivik found common cause with the EDL.

The EDL regards the East London Mosque as the hub of the Muslim extremism it purports to oppose. Regrettably, EDL's hate-filled analysis of Muslims is based on the work of mainstream media commentators who should now reflect on the unintended if not unforeseeable consequences of their Islamophobic discourse.

It is also worthy of comment that Muslim bravery during this outbreak of looting has taken place during Ramadan when Muslims are fasting – without food or water – from sunrise to sunset. This is a hard enough regime when relaxing, but when taking part in dangerous operations against looters, it is worthy of special reward – no doubt something their religion caters for.

Today, as Muslims in Tower Hamlets and around the country continue to work with their neighbours to repair damaged shops and to restore public safety, it is important I conclude this article by paying special tribute to Haroon Jahan, Shahzad Ali and Abdul Musavir, the three typically brave Birmingham Muslims who were killed while defending their neighbourhood on Tuesday night. I pray their legacy will be a wider appreciation of good Muslim citizenship, a reduction of media anti-Muslim denigration, and the elimination of EDL anti-Muslim intimidation and violence.