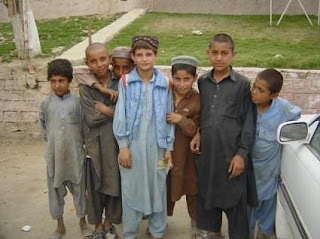 Nadeem knows first hand the misery of life on the streets. Sexually assaulted as a child, he became a pimp of young boys -- the only way he knew how to survive as a member of Pakistan's underclass.

He says he was 12 years old when he was attacked. Since then, he has been dragged into a vicious cycle of horrifying abuse allegedly aided and abetted by police and which few are willing to confront in the Muslim country.

"It was just the third night I slept on a street when a policeman picked me up and did bad things to me. I cried a lot but no one came to help me," Nadeem, now 17, told AFP.

He was sexually assaulted for a second time by the leader of a street gang, who then forced Nadeem to join the 17 other children in his gang.

By 14 he was a full-time sex worker. His pimp gave him a mobile phone to keep in contact with clients.

According to charities which work to protect street children in Pakistan, up to 90 percent are sexually abused on the first night that they sleep rough and 60 percent accuse police of sexually abusing them.

"Police (should) protect people. When policemen are themselves involved in molesting children, who will protect them?" he asks.

"What we have gathered in our research is that policemen make up more than 60 percent of those who physically torment, sexually harass street children," said Anwer Kazmi of the Edhi Foundation, the country's largest charity.

Karachi is home to Pakistan?s biggest community of street children -- tens of thousands of victims of domestic violence and broken homes, drugs and crime, in the steamy port city.

More than 170,000 street children live on the streets across the country.

Illiterate, uneducated and most without family, the children can grow into seasoned criminals, drug addicts or fall prey to Islamist militancy.

When Nadeem turned 16, he tried to escape. He received counselling from a charity and was taught photography. He tried to make it his profession.

"I was happy with my work, but a year ago, a policeman put me in the lockup on a false charge, confiscated my camera and abused me sexually," he said.

The experience turned him against the world.

"I decided to become stronger. Now I have my own gang and many influential people are my clients. No one can touch me now."

Nadeem says he acts as a pimp to 10 teenage sex workers aged 14-18, taking a sizeable cut of whatever the boys bring in earnings.

"Half an hour after finishing with one client I get another call and I forget all about wanting a respectable life."

Nadeem lives on a street in the downtown Saddar neighbourhood, but rents a room in a cheap hotel when he has surplus cash. He confesses that he too sexually assaulted a child.

"He insulted me and my family so I told him he had it coming. So I grabbed him and gave it to him. I still remember that night. I haven't done that to anyone else since then and I don't want to."

Rizwan is a fisherman's son. He insists he is 12, but he looks much younger. He left home three years ago because his family beat him and says he was abused by police. IHDF fears he too will be dragged into the sex industry.

"The police tried to make me do bad things six or seven times but I managed to get away," he said.

"But one day, one policeman took me by force, put a cloth over my mouth and took me to a place where he did bad things."

Shaukat Hussain, head of police in Karachi's southern district where many street children live, said any officers found guilty would be punished, but denied the force was anything like as culpable as reported.

"There are black sheep in our department who are involved in such acts. But we punish anyone whose crime comes to surface and is proved," he told AFP.

"The number of policemen who are involved in such acts is far less than what is being claimed by the media and NGOs," he added.

"A draft bill for child protection has been pending with the interior ministry for two years," a senior official of the human rights ministry told AFP on condition of anonymity as he was not authorised to talk to the media.

The bill is designed to tighten the laws protecting children, bringing them in line with international conventions, doing more to help children in difficulty and bringing police and other offenders to book for abusing minors.

"There is a visible lack of interest on the part of the government on this issue... despite our constant pursuits," said the ministry official.

One former police official told AFP that he organised seminars to sensitise police on how to treat street children four years ago, but that the programme was abruptly abandoned when he retired.