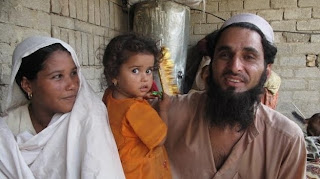 In Pakistan, family planning is an uncomfortable topic fraught with religious overtones.

But in one of Asia's fastest-growing populations, a story of women giving birth challenges stereotypes, including what Islam has to say about women's health and family planning.

According to a new government survey, Pakistan is producing nearly 4 million babies every year, and most are born into poverty. The World Bank says 60 percent of Pakistanis live on less than $2 a day.

Yet clerics in religiously conservative Pakistan tell the Muslim majority that the Quran instructs women to keep bearing as many babies as possible. The message from the mullahs is that contraception is generally haram, or a sin.

"Family planning is wrong and un-Islamic if it is practiced routinely," he says. "If it permanently stops a woman from becoming pregnant, it is harmful and illegal."

But a woman can temporarily put off becoming pregnant. The mufti says the Quran encourages mothers to space their pregnancies and to breast-feed their babies for prolonged periods. One verse states: "Mothers shall nurse their children two complete years for whoever desires to complete the nursing term."

If a new pregnancy would interfere with breast-feeding and the health of a nursing child, Islam allows a woman to temporarily stop having babies. The mufti says during that period Islam can be interpreted to mean the man may also use condoms and the rhythm method.

Zakaria says being poor should in no way limit having babies. Referencing the Quran, he says, "God will provide the resources and no one will starve."

"There are clear instructions in the Holy Quran, in which Allah says, 'We give you food, and we will also give food to your children. Food is not your responsibility, but God's,' " he says.

The mufti says the Quran also instructs that children must not be deprived of a proper upbringing. However, in Pakistan 38 percent of all children under 5 are underweight, and according to government data, malnutrition is widespread among mothers. The lack of resources in Pakistan today invites the question whether the mufti and his teachings are not consigning millions of people to misery.

The mufti answers: "Every society has its own value system. You should not judge us by yours. Children in the West lead a luxurious life. Earth is their heaven. Our children should not be compared with them," the mufti says. "Muslims don't pay much heed to the mundane pleasures of this world. Our reward will come in the next life."

The mufti adds that the West has taken modern contraception too far by removing the fear of getting pregnant and therefore removing women's sexual inhibitions. In Pakistan, "if a woman's fear is removed," says the mufti, she will stray into bad behavior "and offend God."

A 'Tragedy': Lack Of Education

Seventy percent of married women in Pakistan, according to the government, use no birth control method at all. And the government is ineffectual in promoting family planning, says Dr. Yasmin Raashid, a leader in obstetrics and gynecology in Pakistan. But she says if properly followed, the Quran's teachings about spacing pregnancies would automatically mean smaller families.

"And [ages] 20 to 30, of course, is the safest time to produce children," she says. "If you look at it, then, if you have a spacing between of let's say four years or three years between each child, they would not be producing more than three or four children."

Raashid says more than anything else illiteracy undermines family planning in Pakistan.

"Educated mothers limit their families. There's no problem," she says. "The tragedy in our country has been that the majority of women in Pakistan are not educated."

Raashid says educating young girls is the single best policy for reducing the country's high fertility rate and for achieving smaller, healthier families. She sites Sri Lanka where the literacy rate is 91 percent. There the fertility rate — or the average number of children a woman has in her lifetime — is 2.3, compared with Pakistan, where it is 3.9. In Pakistan, infant mortality is nearly six times as high as in Sri Lanka — a smaller, poorer country.

"And the only thing that you see different there is that women are educated there," Raashid says. "They know about their rights. They know what has to be done where their children are concerned. They know what to do where their own health is concerned. You educate the women of Pakistan and we would have the same results."

How To Reduce Maternal Deaths


In Pakistan, less than 1 percent of GDP is spent on health care. Government hospitals lack qualified staff and medicine. Private hospitals like the United Christian Hospital in Lahore, where Raashid is the chief physician, are underfunded. In her hospital nursery, soap is scarce. But a newborn baby boy, with a shock of black hair, does have the benefit of an incubator where he lies sleeping.

He's one of the fortunate few who could take advantage of being born inside a hospital, which is not the case for most children in Pakistan.

It's estimated that at least 70 percent of Pakistani children are born at home, many without a skilled birthing attendant. The result is that 12,000 mothers die in childbirth in Pakistan each year. To save more mothers, Raashid says, Pakistan must invest in more midwives.

"You really don't need hi-fi doctors everywhere," she says. "You need proper-trained midwives. Skilled birth attendants working in the villages — I mean skilled women — can go and deliver the patients at home. And at the moment we have only 25 percent of women being delivered by skilled birth attendants."

Raashid leaves the room to see a patient and perform an abortion.

In Islam, there is no strict, unanimous ban on abortion, but Muslim jurists agree that it is forbidden after the fetus is completely formed and has been given a soul. Islamic theologians differ on when that happens: The Hanafi School of Islamic law prevalent in Pakistan is among the least restrictive. It says the soul is deemed to come into the fetus at four months, and so up to four months, abortion may be induced for "good cause."

But Raashid says abortion has become a dangerous form of birth control as women submit themselves to unskilled practitioners.

"I know definitely that there is a very large number of women who die because of abortion-related complications," she says. "It's the fifth-leading cause of maternal death in Pakistan because of the infections related to incomplete abortions and septic abortions."

Raashid's hospital deploys female health care workers who go door to door counseling expectant mothers in neonatal care and family planning. They work the narrow warrens of distressed and dilapidated neighborhoods of Lahore. In one congested lane, children fight, toddlers frolic, and proud parents stand in doorways showing off their infants to a stranger. The pressure on women to keep producing babies is obvious.

Rani and Tariq, a young couple with seven children, are a case in point. The pair sits on a large bed in their three-room home with cranky babies splayed around them in the stifling heat.

Erum Ahktar, the health care worker, tells wife Rani about the importance of keeping her children healthy. In a barely audible voice, the diminutive mother with huge brown eyes says that she herself is sick — and that she wants to stop having babies, and told her husband so.

Rani says she had five sons in a row, but her husband wanted a daughter, so they had a sixth child — the hoped-for baby girl. But her husband, Tariq, who has held only sporadic jobs, wanted a second daughter. And Rani got pregnant again — and again. Now in her mid-20s, Rani is expecting her eighth baby. Tariq explains that he was obsessed with having daughters in a country obsessed with having sons because he came from a family of all boys and felt deprived with no sisters.

When pressed, Tariq acknowledges that he has compromised his wife's health. He says he understands how people could think he was irresponsible. He says has now gotten the daughter that he wants, and is reconciled with that.

"I've committed mistakes," Tariq says, adding, in this day and age "it is tough enough to raise two children," let alone the seven he has with another one on the way.

Three hundred miles away, the roles are reversed for another young couple.

Their village of Poukai, in Pakistan's North-West Frontier, is an impoverished place where children cool off in the dirty water of a local canal, their livestock swimming alongside them.

In their home shared with 12 relatives, 25-year-old Khasrat and her husband, Qadar Gul, are expecting their fourth child. Khasrat says she never went to school and cannot the read the Quran, but she listens to the clerics' sermons carried over loudspeakers equating contraception with sin, a restrictive interpretation of Islam that allows few choices in family planning. Khasrat is feeling unwell with undiagnosed pelvic pain. She is 8 1/2 months pregnant.

"I am the one who insisted on another boy," she says. "It was my husband who wanted to stop at three."

Qadar Gul is worried about his wife's health and about feeding more mouths — he's injured and cannot work. He is also atypical because unlike a lot of the men here, he does not reject family planning. He practiced abstinence, but his wife insisted that she wanted her older son to have a little brother.

He says he thought about the consequences of having more children. "We are poor," he says. He's unhappy with his housing, saying there's not enough room. He told his wife this, he says, but she persevered. And his wife said, "Let it be God's will."