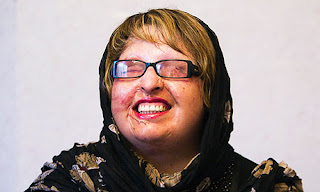 A woman blinded with acid in Iran has pardoned her attacker, a man who was scheduled to lose his sight in an eye for an eye punishment on Sunday.

Majid Movahedi, 30, had been taken to Tehran's judiciary hospital to be blinded with acid after being rendered unconscious, but Ameneh Bahrami, his victim, spared him at the last minute, Iran's semi-official Isna news agency reported.

Iran's judiciary had given the green light to the administration for the retributive punishment, which would have been the first blinding of a convict in the country, but human rights groups across the world called on Bahrami, who had asked for eye for an eye justice in the court, to pardon him.

Bahrami, who had refused to marry Movahedi, was disfigured and blinded by him when he threw a jar of acid in her face while she was returning home from work in 2004.

"I feel very good. I'm happy that I pardoned him," Isna quoted her as saying. "For seven years I've been trying to pursue retribution and to prove that the punishment for an acid attack is retribution but today I decided to pardon him. This was my right but in future the next victim might not do the same."

On Sunday, Bahrami asked for financial compensation instead of blinding Movahedi, an option she had previously refused to consider.

Speaking to Isna, Abbas Jafari Dolatabadi, prosecutor general of Tehran, confirmed that Bahrami had pardoned Movahedi and described her move as a "courageous act".

Islam's Sharia law allows for qisas (retribution) but it also advises for clemency, especially before and during Ramadan, which starts on Monday in Iran. "Inflict the same life on him that he inflicted on me," she had told the court.

Bahrami said that international focus on the case was a factor she considered in pardoning Movahedi. "The second reason I decided to pardon him was because it seemed like the entire world was waiting to see what will happen," she said.

In a highly publicised dossier in November 2008, a criminal court in Tehran ordered retribution on Movahedi after he admitted throwing acid at Bahrami, and entitled her to blind him with acid.

In reaction to the news, Amnesty International, which had urged Bahrami to pardon Movahedi, called on Iran to review its penal code.

"Majid Movahedi committed a horrendous act which has ruined Ameneh Bahrami's life, and the state has a responsibility to bring him to justice and to ensure that Ameneh Bahrami receives recompense for the damage done to her," said Amnesty International's Middle East and North Africa deputy director, Hassiba Hadj Sahraoui.

"But deliberate blinding inflicted by a medical expert is a cruel punishment which amounts to torture, which is prohibited under international law.

"The Iranian authorities should review the penal code as a matter of urgency to ensure those who cause intentional serious physical harm, like acid attacks, receive an appropriate punishment – but that must never be a penalty which in itself constitutes torture," she added.

Bahrami, who has an electronics degree and worked in a medical engineering company before the attack, moved to Spain with the help of the Iranian government where she has undergone a series of unsuccessful operations.

She briefly recovered half the vision in her right eye in 2007 but an infection blinded her again.

Bahrami has recently published a book in Germany, Eye for an Eye, based on her personal life and her suffering since she was blinded.