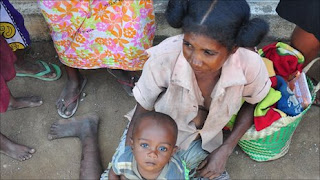 Forced to work as a "slave maid" for wealthy families in Lebanon for 15 years, Abeline Baholiarisoa - a 59-year-old woman from Madagascar - finally achieved her freedom in March.

Madagascar's government chartered a plane to evacuate her and 85 other women.

The youngest of her four children, whom she left behind when he was six years old, played a key role in her evacuation, tracking her down via a welfare agency that rescues "slave maids", she says.

Ms Baholiarisoa says she was trapped in "a living hell" after being duped into going to Lebanon.

A recruiting agency had promised her a nursing job for three years, with a salary of $800 (£486) a month.

Ms Baholiarisoa says she thought it would give her a chance to save money, which she could send to her children.

But her dream was shattered the minute she touched down in Beirut.

"It was a trap, because as soon as I got there they took away my papers and said my contract didn't mean anything," Ms Baholiarisoa says.

"They said, 'Abeline, this is null and void.' For the next 15 years they shattered my life and the lives of my children."

Ms Baholiarisoa says she was put to work as a maid with another Malagasy woman in the house of a rich couple with newborn triplets.

"I worked 24 hours a day and received $160 a month. From this, I had to pay the lady of the house money for my food because they only gave us a quarter of a loaf of bread and some bits of fruit each day."

Ms Baholiarisoa says she ran away from her first job after seven months and her second job after two years.

But with no papers and no way to return home she was forced to accept maid jobs for 12 more years.

Fabienne Marie Ange - a social worker with Madagascar's Union of Qualified Domestic Workers (SPDTS), which specialises in helping "slave maids" - says many of them are so traumatised that they do not even know where they are.

"Sometimes in Lebanon the boss gives them drugs to keep them strong. They have to work 24 hours a day, seven days a week and they don't eat properly. It has an effect on their mental [health]," Ms Ange says.

Ms Baholiarisoa says she refused her employer's attempts to give her pills for "stress", but she knew of people who ended up with an "empty brain" after taking them.

Some women are forced to work in Lebanon's clubs and streets as prostitutes, while some maids sell their bodies on the side just to pay for food, Ms Ange says.

According to SPDTS President Noro Randimbiarison, some of the women have died in mysterious circumstances in Lebanon.

When their bodies were eventually returned to Madagascar, it was discovered that several of them had missing organs.

"Some families decided to open the coffin and found that the girl didn't have eyes, her eyes had been replaced by doll's eyes, or they didn't have a tongue or intestines or the heart. This really happens. It's real," says Ms Randimbiarison.

Medical reports on the cause of death are vague - and some families have been told that the women committed suicide by jumping off tall buildings, she says.

Ms Baholiarisoa claims women were pushed from windows, sometimes to cripple them just enough so they could not run away; others disappear, fuelling suspicion that they were killed.

"We have no idea how many women have died out there or have gone mad because if you ask a boss where is his maid they say she ran off with someone and it's over," she says.

"Where is the proof that she's run off and they haven't buried her in the courtyard? We don't have any proof."

Madagascar's Minister of Population Nadine Ramaroson, the only government minister tackling the issue, says "a very organised network" involving senior government officials and businessmen emerged in the 1990s to engage in human trafficking.

Ms Ramaroson says the government is trying to break the criminal networks, but it is not easy.

While one job agency flew 300 women to Jordan last month with the government's approval, 43 women bound for Saudi Arabia and Kuwait were stopped from boarding planes.

Ms Ramaroson said all were recruited from remote rural areas with high illiteracy and poverty levels. Some 16-year-old girls were given forged identity papers showing their age as 21.

She said their contracts stated they would work in top institutions "when these girls don't even know what electricity is".

Ms Baholiarisoa considers herself lucky. Given up for dead by her older children, her youngest child - now an adult - contacted SPDTS to help trace his mother.

They picked up one of her many calls for repatriation at the consulate in Beirut, she says.

Ms Baholiarisoa now helps SPDTS track down other women trying to escape Lebanon and to prevent other women from being duped into taking jobs in the Middle East.

"If the madam at SPDTS hadn't taken me in with open arms I don't know what I would have done," she says.

"It pains me that these girls are leaving because I know what awaits them, especially the beautiful ones."

From the plane load of women rescued in March, Ms Baholiarisoa is the only one with a job.

Some of the women have returned to discover husbands remarried and children adopted.

Others, like Ms Baholiarisoa, have to rebuild relationships after much hurt and loss.