The rise and fall of Geert Wilders’ ideology 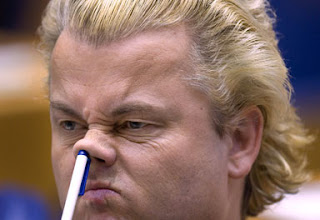 After years of capitalizing on the fear of Islam, Dutch right-wing politician Geert Wilders’ ideology has been severely dented by the Arab Spring and far-right terrorism in Norway.

The year 2011 looked bright for Dutch MP Geert Wilders, founder of the Party for Freedom, or PVV. In the fall of 2010 his party won 16 percent of the seats in parliament and obtained a decisive role in the new government coalition, with the Christian Democrats and Conservative Liberals. Opinion polls early this year indicated that his Freedom party would even overtake the Labor party as the second largest. Wilders has maneuvered himself into the driver seat, becoming the most important politician in Dutch politics and is slowly starting to become a household name on the international terrain as well.

Wilders’ party program has been based on what we could call the Vienna school of thought – referring to the year 1683 when the Ottomans tried to overtake Vienna. By referring to this historical event, cultural conservatives argue that Muslims have, and will, always strive to take over Europe and enforce on it its “barbarian” rule.

The accompanying discourse of cultural conservatives is very civilizational. Wilders and his counter-parts repeatedly stress the difference between Christian-Jewish and Islamic values: Enlightenment versus barbarianism, democracy versus dictatorship and freedom versus oppression. This difference, Wilders argues, is intrinsic and makes Europe incompatible with Islamic values – leaving no other option than to counter the influence of Islam.

By constantly linking Islam with issues such as immigration, public safety and terrorism, a paradigm is created in which Islam is the problem, and erasing it becomes the solution. This paradigm facilitates Wilders to argue that the Quran is similar to Hitler’s ‘Mein Kampf’ and should be banned, or describe over a million Muslims in the Netherlands as “Islamic voting cattle.”

The argument that Islam is incompatible with Western values, such as democracy, has in the past been defended by the number of Muslim majority states that harbor a dictatorial regime. Indeed, states in which Islam is the largest or sole religion, political freedom is often scarce.

As the Arab Spring erupted early this year in Tunisia, Egypt and many other states in the Middle East and North Africa, it exposed that not Muslims but merely Arab regimes are incompatible with democracy. The protest scene was very much secular in nature as the protesters called for more political freedom, not more religion.

In Syria, every Friday hundreds of thousands of Muslims continue to risk their life for freedom. Even though the regime employs death squads, tanks, snipers and torturers, ordinary men are bold enough to face death to fight for their ideals. The Arab Spring is their “Bastille”, knocking at the gates of dictatorship and oppression. The Arab age of enlightenment has started, which Wilders tends to ignore as it severely undermines his ideology.

Norway’s Christian terrorist, Anders Breivik, also adhered to the Vienna school of thought and his views are shockingly similar to Wilders’. Breivik’s over 1,500 pages-long manifest encompasses the urge to purify Christian Europe from Islam and calls for support for Israel. In essence, the manifest reads as a violent adaptation of the Freedom Party’s program.

Breivik was unmistakably inspired by Wilders, labeling the PVV as the “only true conservative party” in Europe. Although it is unfair to stain Wilders’ “guilty by association”, it does raise the question of the (unintended) consequences of protracted hate speech directed at a race, religion or ethnicity.

His terrorist act was inspired by the images of Medieval Christian Europe, just like the Muslim Caliphates inspired al-Qaeda. Breivik is as much a product of Christian fundamentalism as Bin Laden is from radical Islam.

2011, therefore, dawned as the year in which millions of Muslims peacefully marched for political freedom and a Christian, Islam-hating terrorist killed dozens of innocent children. Consequently, Wilders’ ideology is finally shattered to pieces.

*Anno Bunnik, a political commentator living in the Netherlands, is a graduate from King’s College London and interned at the Carnegie Middle East Center and the International Centre for Counter-Terrrorism.
Posted by Zafar Khan at 10:00