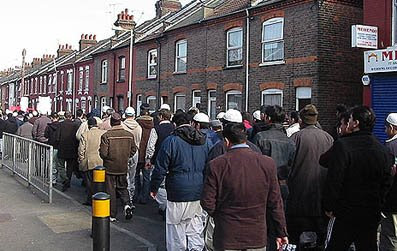 Few months back, al-Muhajiroun, who are banned in UK, organised a rally against returning British troops from Iraq. 20 people turned up for this protest in a town that has 20,000 muslims. The media rewarded the extremists by giving them extensive coverage. All the papers carried the item saying that Muslims hurled abuse at returning troops from Iraq. Now as a repsonse some far right extremist has bombed an Islamic Centre.

Inayat Bunglawala has written an article in the Guardian on this:

Monday's suspected arson attack on the al-Ghurabaa mosque in Luton follows a number of written threats received at the mosque believed to have been sent by far right groups. The mosque holds daily Arabic/Qur'anic lessons for about 90 children though fortunately the arson attack – the police say they believe an accelerant was used – took place after midnight when the mosque was empty.

Tensions have been running high ever since a tiny group of al-Muhajiroun supporters held a typically offensive demonstration during a homecoming rally in Luton town centre for soldiers from the East Anglian regiment two months ago.

The mosque management went out of its way in a public statement issued following the arson attack to say that it had "strongly condemned the provocative protest by a small group of extremists against the returning British troops" – but it should worry us why it felt the need to do so. Regardless of one's views about the actions of the protesters – and yes, they were moronic and infantile – an arson attack on a place of worship frequented by children and the elderly is completely indefensible and we must hope that the police succeed in bringing the perpetrators to justice.

The mosque management has also said that it now intends to "invest approximately £6,000 on security measures" for the mosque. Such a step seems to be a sensible precaution to take against possible future attacks but I hope it does not go down the same route as the Community Security Trust which helps provide "physical security" in the form of trained guards at Jewish events. A better approach must surely be to work with the police to ensure that they have the necessary support and resources to protect all communities.

I spoke with Farasat Latif, a spokesman for the al-Ghurabaa mosque, this morning and he said they first started receiving written threats about three weeks ago. The messages, he said, were full of profanity and threats of the "how dare you insult our troops – you will pay for this" variety. The messages were passed on to the police by the mosque management.

Farasat said that they began noticing suspicious characters visiting the mosque in the days leading to the attack and believes that they were scouting the mosque. The arson attack destroyed the mosque's library, kitchen and a corridor leading to the main prayer hall. Farasat added that the police had spent a day and a half collecting forensic evidence at the mosque and in his view had been "helpful and thorough".

How had the local community reacted to the attack on their Islamic centre? Farasat said that there was a deep sense of shock but also anger towards the Muhajiroun supporters who they felt had deliberately inflamed tensions in the area.

We have noticed a lot of ill-feeling among non-Muslims since the Muhajiroun protest. The media played a role in massively exaggerating the support that these guys have and not making clear that we had nothing to do with it. At the da'wah (Islamic outreach) stall in the town centre we have had quite a few people be abusive towards us, but when we explain to them that we were just as appalled as they were by the actions of the protesters they visibly changed in their attitude towards us. I don't accept that many of these people are racists, but they have been misled by what they have read and by what they have been shown. We have to be willing to reach out to others and take the time to explain things patiently.

Farasat's evident frustration at the damage wrought by the Muhajiroun attention-seekers and the way they have consistently provided fodder for anti-Muslim bigots is, in my experience, widely shared by UK Muslims. But what is to be done? We cannot – in a free society such as ours – really prevent morons from legally behaving moronically. As long as the Muhajiroun protesters remain within the law, the challenge must really be for all the rest of us to make sure we do not lazily conflate their actions with the mainstream Muslim majority.