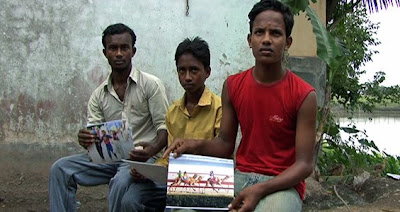 Munna Mia was just five when his family flew to the Middle East to escape the hardships of Bangladesh -- but all that awaited him was a life of danger, pain and hunger as a child camel jockey.

His father, a bricklayer, had been offered a job in the United Arab Emirates by a recruitment agent who told him he could bring his wife and three children if he paid a 4,500-dollar fee.

Grinding poverty and a lack of jobs in Bangladesh drove Mia's father to scrape together some of the money by selling the land he owned and getting loans from family and friends.

The rest he borrowed from the agent, with the promise it would be repaid with money he earned in Dubai.

But the dreams of Mia and his family were shattered when they arrived, and he and his two brothers -- all aged between three and eight -- were forced to ride in camel races for long hours under the desert sun.

"We didn't get much to eat and every morning they would weigh us. If we were even a gram over 20 kilograms we would be beaten with a stick that gave us electric shocks," Mia told AFP.

"My brothers and I were separated from our parents and lived in a hostel with other jockeys.

"For a year, they trained us by just throwing us on top of a camel and I often fell off. I still have lots of problems because of all the injuries."

Mia and his brothers were among thousands of South Asian children used as camel jockeys in the UAE, Saudi Arabia and other Arab states after being brought in by traffickers or under false pretences with their families.

"The hot sand would burn my feet. We'd come back at night and we were exhausted. Every day I'd wonder if I would die," said Mia, who rode in races until he was nine.

He seldom wore a helmet and his uniform was a cotton pair of shorts and T-shirt.

The UAE this week gave Bangladeshi authorities nearly 1.5 million dollars to compensate almost 900 former child jockeys for the injuries and abuse they suffered.

Bangladesh's deputy home affairs minister, Tanjim Ahmed, whose department is in charge of distributing the funds, said each child would get between 1,000 and 10,000 dollars depending on their circumstances.

The money would pay for their medical treatment and education, he said.

"Using children as camel jockeys was despicable. It stirred the world's conscience," Ahmed said, adding that the UAE government told him that robots were now being used in place of children.

The UAE officially banned child jockeys in 1993 although abuses remained widespread until 2005.

According to the UK-based human rights group, Anti-Slavery International, around 2,000 unaccounted for child camel jockeys have not yet returned to their families from the Gulf states.

Christine Jaulmes, a spokeswoman for the charity Unicef, which has helped track down former child jockeys, including Shameem, says: "We cannot trace all of the children who have been involved in camel racing.

"Also, many children were killed during racing by falling from the camels and so on, so we don't have a record of these children."

Many children will never find their way home. They are unable to identify their families and home communities and often do not speak their native language because they were put to work at such a young age.

Shameem is actually among the lucky ones. Now thirteen, he could receive up to $10,000 in compensation, a fortune for most Bangladeshis, 40 per cent of whom live on less than two dollars a day.

For his family, who are still struggling, this money is an answer to their prayers - finally they can see a path out of poverty.

Tanjim Ahmad, the Bangladeshi state minister who is managing the fund at the home affairs ministry, says he hopes the UAE compensation initiative "will encourage other countries to take the necessary steps to prevent child labour and to invest in anti-trafficking operations".

"We do appreciate the efforts [of] the UAE, once they identified the problem ... we intend to use those funds to rehabilitate those children affected by this horrible episode," he says.

For those children who are under 18 years of age, the government plans to put the money into trust funds that would pay the former jockeys interest until they come of age and can access the money.

In addition, funds will be made available from these accounts for families to pay school fees – an important part of rehabilitation and reintegration.

But, perhaps surprisingly, Shameen's family still dream of a better life back in the UAE.

Abul, now a carpenter, continues his battle against poverty and, although their experience in the UAE was heart-wrenching, he knows he can earn more money if they moved there again.

Perhaps they will eventually use their new found wealth to try anew. If they ever do return, one thing is for certain, Shameem and his brothers intend to stay as far away as possible from the camel track.
Posted by Zafar Khan at 10:24