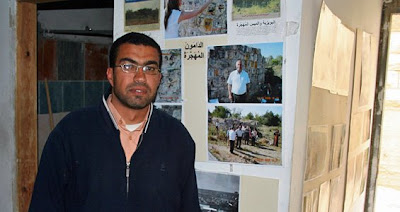 In a small anonymous home in the West Bank, a Palestinian academic has set up a project which is almost unheard of in the Occupied Territories.

Hassan Musa is the curator of a museum exhibition dedicated to the Jewish Holocaust in Europe.

The cracked white walls of this makeshift museum in the village of Ni'lin are covered from floor to ceiling with images of people forced out of their homes, tortured, imprisoned, starved and murdered.

In addition to the pictures depicting the Nazi brutality against Jews in Europe, there are also images of the Palestinian Nakba (catastrophe) following the creation of the state of Israel in 1948 and the violence in Palestine since.

On one wall, there is a picture of a scared Jewish boy holding up his hands as Nazi soldiers look on; the caption reads: "Make your final account with Hitler and the Nazi Germans, not with the Palestinians."

On an adjacent wall there are photos of dead children, demolished homes and women screaming during the Israeli war on Gaza in January.

Musa, who is also a member of Ni'lin's Popular Committee Against the Wall, says pictures of the atrocities committed against both peoples were strategically placed side-by-side to not only reflect the suffering of both and help Israelis and Palestinians better understand each other, but also to demonstrate how victims of one conflict can become the harbinger of another.

"The Palestinians have no connection to the Holocaust in Europe, but unfortunately we are paying the price of a misdeed we did not commit," he said.

In the main room, a large banner sends a direct message to Angela Merkel, the German chancellor, a message: "Why should we Palestinians continue to pay for the Holocaust?"

Musa believes this question is the impetus behind the exhibit, hoping it will challenge the international community on what is happening between Israelis and Palestinians.

"The world is shamefully silent about what is happening in Palestine as a way of expressing their sorrow for the death of six million Jews, but in the meantime, they are supporting the state of occupation," he said.

Ni'lin has become synonymous with violent weekly clashes between Israeli soldiers and activists protesting against the construction of the 'Separation Wall'.

Since then, Ni'lin residents have lost more than 85 per cent of their land to confiscation and illegal settlement building.

People in the village also accused the Israeli military of killing four Ni'lin residents since protests against land confiscation began in May 2008.

Among those was Musa's 10-year-old nephew, Ahmad, who died on July 29, 2008 from a bullet wound to the head; a number of residents and activists have also been injured in the protests.

In March, Tristan Anderson, a 38-year-old American activist acting as an observer with the International Solidarity Movement, was shot in the head with a high-velocity tear gas canister, leaving him in critical condition.

It is these events that make the location of the museum all the more significant, Musa says.

In a place where Palestinians struggle to fend off occupation, Musa now offers them an opportunity to empathise with and further understand their occupier.

Israeli, Palestinian and international visitors continue to trickle into the museum, though they are fewer in number than the crowds that gather for the protests.

Remaining optimistic, Musa hopes this endeavour will encourage Israelis to pressure their government to halt the occupation.

"Our message to the Jewish people all over the world is that having been victims of such a brutal genocide, we expect you to be messengers of all the principles of justice, mercy and humanity," he told Al Jazeera.

According to Musa, reaction from Palestinians, especially those in the village, has been positive; the exhibits are, in many instances, the first images they have ever seen of the Holocaust.

Musa says some Palestinian visitors leave the exhibit feeling sorrow for the Jewish people, but also with the same question posed in the messages plastered across the walls: "Why are they punishing us?"

Islam Online are creating their own Palestine Holocaust Museum in Second Life. Check it out here.
Posted by Zafar Khan at 17:19