Hijab and Turbans still a problem in USA 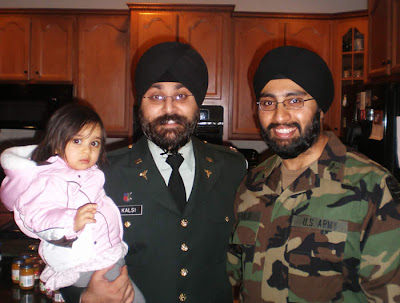 A Sikh civil rights and advocacy group is asking the Pentagon to drop its requirement that Sikh men doff their turbans and cut their beards and hair in order to serve in the military.

The Sikh Coalition is taking on the cause of two commissioned officers who are now in their last year of medical and dental school and slated to enter the Army's Officers' Leadership Basic Course in July.

Capt. Kamaljeet S. Kalsi and 2nd Lt. Tejdeep S. Rattan, the organization says, were told by recruiters they would be able to serve with their articles of faith -- the turban and uncut hair requirements of male Sikhs. Since the men accepted their commissions, the group says, they have continued to maintain their articles of faith throughout their schooling.

Army spokesman Lt. Col. Christopher C. Garver told Military.com today that he could not comment on claims by the officers that recruiters told them they could serve wearing turbans and beards. He said that is something that would come up among the officers and their chain of command once they move from Reserve status to active duty.

The most recent correspondence to Gates is a "sign-on" letter that already has garnered the support of dozens of other organizations, including the Anti-Defamation League, the NAACP, the Military Law Task Force of the National Lawyers Guild, the National Council of Jewish Women, the Council on American-Islamic Relations, and the American Civil Liberties Union, according to the Sikh Coalition's Web site, www.sikhcoalition.org.


Its surprising that people in the USA still go through these problems. Hadia Mubarak in Newsweek writes:

Last month, as I was watching the news coverage of President Obama's visit to Turkey, I thought back to an awkward experience I had as an undergraduate student applying for a job at my university. When I handed the receptionist at the student union my Social Security card, a required form of identification, she told me she needed my passport as well.

Surprised, I questioned the need for it. She brought over her supervisor, who glanced at my hijab—a headscarf worn by many Muslim women—and asked, "Aren't you an international student?" "No," I said. "I'm an American citizen. I was born in New Jersey." Her mouth dropped open and she stammered, "Oh, you're not a foreigner?"

It was not a new experience for me, as a Muslim growing up in this country. Before people learned my name, saw me run at a track meet or heard me debate an argument, they assumed they knew who I am.

That's why Obama's decision to visit a Muslim country within the first 100 days of his presidency was such a significant moment for me. Hearing his unwavering, unapologetic message to the Turkish Parliament filled me with pride: yes, he told the world, Muslim Americans exist, and our existence has enriched—not impoverished—American culture. His words mirrored what I have long sought to convey to other Americans: that you can be both a devout Muslim and a patriotic American.

I can only hope my fellow citizens get the message. When many Americans see Muslims like me, they tend to define us as something non-American, which forces us to choose between our religion and nationality. As long as Islam is equated with a foreign culture, as opposed to a faith like any other practiced here, then our mosques and our schools and our headscarves will continue to be perceived as a rejection of "American culture." This idea of Muslims as "other" surfaces every time someone like my friend Kathy, a veil-wearing Muslim American, is told to "go back home" when she and her daughter eat at Subway, or when a man plows his truck into a Tallahassee, Fla., mosque to remind Muslims they're not safe in this country.

Of course, Obama is just one man, and one man can't erase years of hard-wired prejudice. But just as African-Americans never thought a black man would be elected president, just as Jews once struggled with the same paradoxes of assimilation as I have, Muslim Americans must realize that acceptance will require patience, optimism and, yes, even a little effort on our part.

I have learned to go out of my way to confront the stereotypes brought to the surface by my headscarf. At times, that has meant speaking out in public forums. At other times, it has meant striking up a conversation with anyone who passes by as I walk my baby through our neighborhood. I have learned through personal experience that interaction and kindness can go a long way toward knocking down barriers.

Obama's gestures make me feel empowered to do more. His words and deeds have given me cause to believe that someday soon, people will look at me and, instead of seeing a woman with a headscarf, they'll see another American, just like them.
Posted by Zafar Khan at 11:53