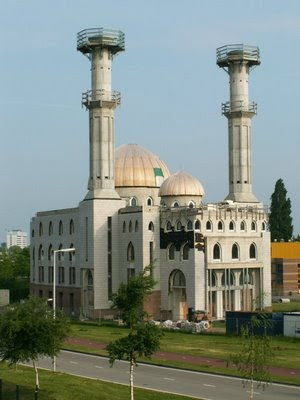 Muslims in Europe are more loyal to their countries, have a strong willingness to integrate and have strong confidence in democratic institutions, a new global poll has found.

"European Muslims want to be part of the wider community and contribute even more to society," said Dalia Mogahed, head of the Gallup Center for Muslim Studies.

The "Gallup Coexist Index 2009: A Global Study of Interfaith Relations" poll found Muslims in key European countries identify themselves with their country of residence.

The survey, by Gallup and the Coexist Foundation, found that 52 percent of French Muslims identify themselves with their country, compared to 55 percent of the general public.

The poll said the findings run counter to the prevailing perception that European Muslims are more loyal to their countries of origin.

"Since 9/11 and the terrorist attacks in Madrid and London, mistrust toward European Muslims has become palpable," the poll authors wrote.

"The integration debate has to widen its frame, moving beyond the confines of security and religion, and focus more on the socioeconomic struggles of citizens of all faiths."

The survey, described as the first of its kind, polled at least 500 Muslims in June and July of last year.

At least 1,000 members of the general public in each country were also randomly surveyed to create comparisons on specific issues.

The survey also found that European Muslims have a strong willingness to integrate.

"This research shows that many of the assumptions about Muslims and integration are wide of the mark," said Mogahed, who was the first Muslim woman appointed to a position in US President Barack Obama's administration.

It showed that Muslims in France, Britain and Germany are more willing to integrate into society.

The poll found that 49 percent of French Muslims are tolerant and have a "live-and-let-live attitude toward people of other faiths, and they generally feel that they treat others of different faiths with respect".

It also showed that 22 percent of French Muslims are integrated, who actively seek to know more about and learn from others of different religious traditions.

In Germany, 49 percent of Muslims are tolerant while 13 percent are integrated.

In Britain, the poll found that 45 percent of Muslims are tolerant and 20 percent are integrated.

The poll found strong majorities of British, French, and German Muslims and the general populations in their respective countries believe mastering the national language, having a job, and getting a better education are critical components of integration.

But the survey showed that the pace of Muslim integration in the US and Canada is much faster than in Europe.

"This can be explained by the historical importance of immigration in the development of Canada and the United States as modern nations," said Mogahed.

She added that better access to higher education and work in North America had helped over decades to create more integration and social advancement.

The poll also found that Muslims have strong confidence in democratic institutions.

"Muslims are very likely - often more likely than the general public - to express confidence in democratic institutions and a desire to live in neighborhoods with mixed ethnic and religious backgrounds," it said.

In Germany, the trust placed by Muslims in the state's institutions "proves that strong religious beliefs don't translate into a lack of loyalty."
Posted by Zafar Khan at 12:53