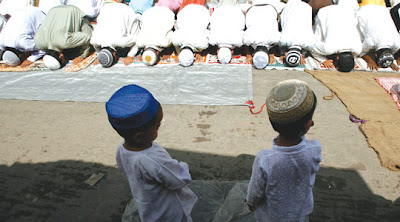 Holding their prayer rugs, scores of Maltese Muslims have gathered in the northeastern town of Sliema to protest the closure of their worship place in the town.

"All we want to do is praise God," Muslim leader Bader Zina told The Times of Malta on Saturday, May 2.

"We are not here to protest or threaten violence but to express our fundamental human right to gather in prayer."

Dressed in traditional clothing, nearly 50 Muslims gathered along Sliema front on Friday to demand the reopening of a flat used as a prayer room.

The flat was locked up by the Malta Environment and Planning Authority (Mepa), citing complaints and lack of license.

"Since when do you need a license to pray?" asked the Muslim leader.

He said that Muslims had a permit to pray at the flat as well as police protection.

Zina said that Mepa had also locked up another flat in Bugibba where Muslims used to gather in prayer.

"I don't see anyone closing down other prayer groups," he said.

"And, anyway, I would rather have a group of Catholics singing praise to God next to my house than a bar."

There is no official figures on the number of Muslim in Malta, an island country with a 400,000-strong population.

Some Maltese backed the closure of the Muslim worship place.

"Malta is a Catholic country," a Maltese woman said.

"They have no right to come here and pray in front of us. I don't care what they do in the privacy of their own home but not here."

"They should go to a mosque. That is where they belong," added her husband.

But many Maltese defended the Muslim right to pray.

The owner of a nearby kiosk said she had no problem with them and some were her friends and clients.

Another man said the praying did not disturb him and it was less noisy than he would have thought.

"I don't see what the problem is," the owner of a nearby kiosk said.

"These are Maltese people with a different religion.

" Why shouldn't they be allowed to pray quietly outdoors if we can have noisy feasts and drunken brawls?"
Posted by Zafar Khan at 15:51

Email ThisBlogThis!Share to TwitterShare to FacebookShare to Pinterest
Labels: Malta