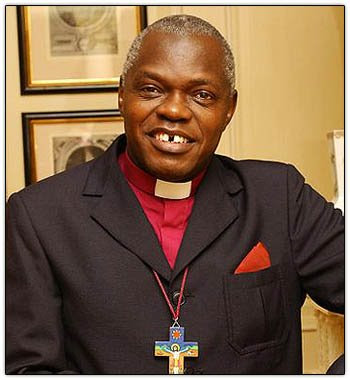 Sometime back we blogged about black Imam of Makkah and how Islam promotes tolerance.

Back in UK, the British National Party (BNP) made are not happy with John Sentamu, the Ugandan-born Archbishop of York.

Simon Darby, the British National Party's No 2, has written a blog calling the Archbishop an "Anti-British zealot" and an "ambitious African."

The far-right party have turned on the Archbishop because he publicly criticised BNP chairman Nick Griffin's suggestion last week that there was a "bloodless genocide" happening in the UK.

The row began when a BNP activist manual was leaked to the media. In it, members were advised not to use the terms British Asian or Black Britons because according to the BNP they "do not exist".

In one section the manual stated: "We don't subscribe to the politically correct fiction that just because they happen to be born in Britain, a Pakistani is a Briton. They're not. They remain of Pakistani stock."

Nick Griffin later defended the manual and said that to use terms like British Asian amounted to a "bloodless genocide".

The comments caused outrage and Sentamu, who only last week called on Britons to celebrate St George's Day, hit back calling the claims "beyond belief".

"You don't have to be a member of the BNP to be clearly English, and it is quite a mistake to suggest that everybody who wants to affirm Englishness affirms that narrow thinking," the Archbishop said. "This 'bloodless genocide'? I think that is just language which is beyond belief."

Despite Sentamu's calls for St George's Day celebrations (something the BNP campaigns for) Simon Darby replied on his personal blog: "Our old friend John Sentamu, or to give him his full name John Tucker Mugabi Sentamu, has been up to his old tricks once again. As if the responsibilities of being the Archbishop of York were not enough the ambitious African has apparently used his power and influence to kindly bestow upon the world the right to be English."

In a statement the group said: "The threats and thinly veiled racism from their senior leadership exposes the real face of the BNP. Even someone as internationally respected as Dr Sentamu is not immune from their poisonous slurs."

Meanwhile, referring to the suggestion that a British Pakistani could only ever be Pakistani, Sarfraz Mansoor, the Luton-born author, wrote: "That may biologically be true; it may be true culturally; but to imply that over time no one who is not of "British stock" (whatever that is) can ever be British is rubbish."

Mansoor also remarked that for a party which supports forced repatriations, the fact that people like him "don't exist" was in fact great news.
~~~~~~~~~~~~~~~~

To reiterate Islam's stand on racism, here is a hadith of prophet Muhammad (pbuh):

Abu Dharr said the Prophet told him: “You are not better than people (of other races) unless you excel them in piety."