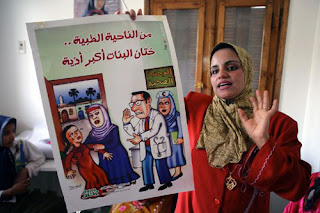 CAIRO: Heba, a 27 year old Egyptian woman, closes the door, offering a tray of glasses of sparkling red Karkale-nectar. Hibiscus-petals swim to the surface of the drink.
The walls of her apartment are likewise painted in clear colors, and the floors are lined with pillows.

Heba does not live with her family, but with friends – something quite uncommon for a young Egyptian female. Though her life seems fairly ordinary– she works, sees friends and visits her family now and then– she is unusual.
According to the World Health Organization (WHO), 100-140 million women worldwide are circumcised, and an estimated 90% of Egyptian women are subject to the female genital mutilation (FGM), generally known as circumcision.
Although Egypt made FGM illegal,except in certain circumstances in 1997, the Egyptian government passed a more severe law in 2008 completely banning the practice, following the death of 12-year-old Badour Shaker in June 2007 during a circumcision.
However, female genitalia are still often cut in most of Egypt.
Amr Muhammad, a doctor dressed in white scrubs, opens the door to a hospital in Dokki, Cairo.

A soon-to-be graduate student of medicine and the doctor’s nephew greets him with a manly hug. These two men share a clean-cut technical approach to talk of birth, genital parts, constructed norms and rites of tradition.
Doctor Amr sits down behind his desk and calls for coffee and tea from reception. A young man enters and places a tray of starch black coffee on the bare desk. The door closes and leaves the clear light reflected on the bare walls of his consultation.
In Cairo, nine months have passed since former President Mubarak was wrested from power.
It is a mere two days after civilians were brutally murdered downtown by the same military which was “one hand” with the people just nine months earlier.
Heba did not participate much in this. She had her own battles to fight. She squats in the couch and starts a part of her story as a female growing up in Egypt.
Heba comes from a family with four daughters. As a child she remembers trying to look over the shoulders of her aunts performing a circumcision on her cousin. But she was not allowed to look.

That cousin was someone she looked up to. The cutting of her genitalia was not something that was “done” to her. It was a part of life, compatible with having the first period, getting married, having sex with your husband: a ritual confirming a young girl’s ‘womanhood.’
Heba remembers that her mother asked her to come upstairs, where female family members were waiting for her.
“She was saying all these things about being pretty, and at that age, you don’t wanna be unpretty,” she says with a grin. “Had I known back then, I would have fought her.”

The doctor smiles vaguely, as he picks up the topic of the talk tonight: Female circumcision.
The WHO defines the FGM procedures in stages, stage three being the most extensive operation.
The first level is a moderately simple removal of the clitoral hood or partial or total removal of the clitoris. This is the far most common one in Egypt.
From here, the span goes to type three, known as infibulation. It means a total removal of all external genitalia, causing a layer of skin to form outside the entire vulva as the wound heals.
By inserting a thin stick in the healing wound, a small hole is left as a passage for urine and menstruation blood.

“Myself I never performed a circumcision, but my colleagues tell me that it was a fairly ordinary practice here until the 1997s,” he says ”but in the years from then and until 2008, where it was made illegal, it became less ordinary.”
“I have only been repairing,” he says, referring to those one or two times a week, when a young woman will be brought in with a ‘traumatic case,’ as he calls it. This is a circumcision performed in an illegal, unauthorized clinic or in the home. The woman is often bleeding heavily and needs stitching.
Amr is obliged to report these cases to the police. But he does not always do so.
“They made a law, but I didn’t see anything change. People are doing it, and they always will. So I hesitate to report – it might put the families in great trouble,” he says.

In Hebas family, they did it as well.
“We went upstairs, and I was sat down,” she recounts, “My mother left me to my aunt and my grandmother. My grandmother sat behind me and put her feet down between my legs, pushing my thighs open with her ankles. My hands were held back.”

It seems very harsh to hold her like that. “But I might have done something stupid when I realized what they were doing. I might have injured myself.”
Heba was 12 at the time.
Most of her youth, Heba did not feel anything missing from her body. Like most women in Egypt, she had a circumcision of a ‘mild’ degree, and most of her genitalia are intact.

But in her early twenties, she started cramping up completely during sex and could not go through with the intercourse.
“It would hurt so bad. In Dubai, I went to a gynecologist to understand why this was suddenly a problem. But it wasn’t until his secretary asked me if I was circumcised, that I understood.”

Circumcision is known to cause psychological blockings due to the physical pain and unease that is connected to the genital area by memory.
The trauma causes the musculature to cramp up in a reflex to avoid further pain, and makes intercourse quite difficult. These are one of the very common long-term effects of the mild levels of FGM.

Extensive cutting to the genitalia is rarely done in Egypt. But the further you get away from Cairo, the more far-reaching is the norm of circumcision.
“We are dealing with two different Egypts, if not more than that. There is one Egypt, which belongs to Amr Diab’s songs and the lovely ladies on TV, politicians and revolutionary youth in Tahrir square,” he says, “but the majority of Egyptians are living in a very different reality.”

Heba is from one of these places that Amr is referring to, a village in Upper Egypt. She had a circumcision of a ‘mild’ degree, and most of her genitalia are intact.
“The only one time it came up,” she says, when asked if she discussed her own circumcision with friends at the time. “…was when I was living in a dormitory in college with girls from the North. I found out they didn’t do it (circumcision, red.) there. For us it was a natural component of a woman’s life; like eating, sleeping, having sex, bearing babies. And they just didn’t have the tradition of doing it.”
Egypt is an enormously socially stratified society. There is a very long way from the bottom of the social ladder to the top, and very few live an average “middle class” life in between. Rural areas suffer from great poverty and lack of political attention from center Cairo.

“We’ve got this culture here, which was imported to us along with the oil from Saudi, when Sadat came in power. It took a firm grip on those of us, who didn’t have a lot to hold on to,” Doctor Amr says. He is referring to the surge of a conservative form of Islam that has been growing forcefully during the reign of Mubarak and Sadat.
“And now, after a number of years with a totally corrupt regime, which has made life very hard for many…Now people start thinking that the problem of the Mubarak-era was not the moral bankruptcy of the political system, but the fact that it was secular.”
Amr sighs, though he does see himself as being in a place to judge what is right and wrong.
“When a family comes here and ask me to check a girl’s virginity,” he says, ”then I do the check, but I will always state that she is a virgin. Even with clear signs of defloration, I would never tell her family.”

Heba on the other hand, is completely unambiguous in the matter. Her trauma was mostly psychological, but the understanding of what happened and the backtracking of psychological blockings has been hard.
“Earlier I did not know anything. I didn’t feel that something was different because I had been circumcised. Until we were taught about female genitalia and the cutting in college – when I saw it and knew what had actually been done, I cried.”
Doctor Amr nods. Coming from a tragi-comic tale of a husband who wanted his wife circumcised in order to tone down a sexual desire he couldn’t match, Amr returns to his main point.

For him, circumcision is a consequence of people wanting to do the best thing for their daughters in the social and economic framework of their life.
“Even though I personally believe, that the demand for virginity is a misunderstood idea of validating a young female’s character and morality, I will still give her and her backdrop what they need to live up to the framework, they are given.”
When he speaks again, he underlines his point from earlier.
“Laws made from the center of political power in this country is not going to change their perceptions of right and wrong. Not until actual change, political inclusion and social justice arrive with us,” he concludes and snaps his fingers.
Heba is equally decided as she speaks now. She is frowning while she speaks.
“I don’t know why my mum wants to do it. I will talk to her again soon, as one of my sisters is growing up.”

“This is wrong. No matter what the reason might be, the body came to us complete, and should not be cut. First of all, your body is yours to utilize and experience in whatever way you want. Cutting in a young girl’s body equals to implying that something is wrong with the way she was shaped. And that is wrong,” she says, her voice firming.