31 Indians Convicted in Violence That Killed Muslims in 2002- Not so swift justice.... 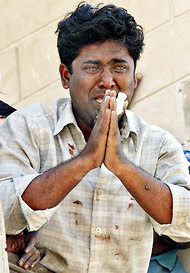 An Indian court found 31 people guilty on Wednesday of killing 33 Muslims in Gujarat State in 2002 during sectarian riots that left more than 1,000 dead. Convicted of murder, arson, rioting and criminal conspiracy, they were sentenced to life in prison and fined. Forty-two other defendants were acquitted.

The verdicts were a milepost in a case whose savagery stunned many Indians. The riots broke out after a train carrying mostly Hindus was set on fire at the station in Godhra, a predominantly Muslim area, killing 59 people. Blaming Muslims, mobs of Hindus rampaged, raping, looting and killing in a spasm of violence that raged for days and persisted for weeks.

Gujarat’s Hindu nationalist government and its police were widely condemned for ineffectiveness in halting the rioting or prosecuting anyone promptly, and the National Human Rights Commission filed a petition with the Supreme Court to press for justice. Five years later, in 2008, the court ordered special investigations into the train fire along with a number of attacks on Muslims.

The case that ended with Wednesday’s verdicts was a particularly gruesome one.

On that evening, March 1, 2002, two days after the train burning, a mob of Hindu rioters surrounded houses belonging to Muslims in Sardarpura village in the district of Mehsana and set them on fire. Dozens of people inside were burned alive.

Killings, arson and looting continued throughout the night, aimed at Muslims. Most of the village’s Muslim families moved away after the episode.

Ghulam Ali, 31, a house painter, lost 13 extended family members, including a brother, a sister-in-law, an uncle and an aunt. He survived by sheltering with others in a half-burned house, and now lives 20 miles away.

“Allah saved us on that day,” Mr. Ali said after the verdict. “Now there is a ray of hope in Gujarat. It gives us confidence that justice will prevail in other cases as well.”

He said he and other relatives of victims were considering whether to appeal the acquittals, a step that Indian law allows.

The special investigation into the train attack led to the trial of 94 people; 31 were convicted. Twenty were given life sentences, and 11 were sentenced to death.

A handful of other group trials have focused on rioters, yielding a few dozen convictions and, in one case, 11 life sentences.

Left unresolved by the trial was the widespread belief in Gujarat that the violence against Muslims in Sardarpura and other villages was deliberately orchestrated.

“The special investigation team did not go into the issue of wider conspiracy of riots,” Teesta Setalvad, an activist who represents riot victims and their families, said after Wednesday’s judgment. “Some of the witnesses testified and hinted about the wider conspiracy, but that was overlooked.”

Ms. Setalvad said the victims were pleased with the life sentences in the case. “We are not in favor of death sentence,” she said.